We have all fallen prey to mindless doodling when work gets quite redundant or arduous. Google has championed the art of blowing off steam right at your desk. Play games like Pony express commemorated the 155th anniversary of the Pony express, a simple game of passing through hurdles delivering mail, a Keyboard with Robert Moog, or Roll through Ghana as a pangolin as if you were Sonic snagging rings, all in the name of love. 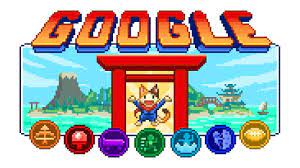 Doodles are usually just artistic variations of the Google logo but now there are some exciting new developments. Google has introduced Google’s Olympic Doodle championship in time for Olympics in Japan. Read further to know how to access the game now.

In this interactive #GoogleDoodle, join calico (c)athlete Lucky as she explores a 🌎 filled with sports, legendary opponents, and daring side quests.

You can access doodle games on your Google Homepage otherwise you can also play the game on the Google Doodle blog.

Google’s Olympic Doodle Championship will be available on your Google Homepage by 22nd July 2021. Doodles are mostly games with a repetitive function and minimal graphics, either jumping up and down or moving side to side however, the Olympic Championship is not the same the characters are well thought out of and are inspired by Japanese history and folklore. They contain a series of 7 mini-games and opponents, dozens of side quests. The ultimate goal of the game is to defeat each sports champion and collect all seven sacred scrolls. There are also extra hidden challenges across Champion Island in the process. Aren’t convinced enough? watch for yourself.

Want to find other addictive games to play at work, click here.