How to raid on Twitch

Building a Twitch account is hard. It can take a very long time to create a loyal community of viewers who will be ready to support you and your content as it expands. Much like YouTube and other streaming platforms, Twitch is not a place where you can make a significant mark easily. It requires time, patience, and effort.

One way to achieve that is by using a common Twitch promotional trick called Twitch raiding. This act helps to promote other Twitch streamers who will most likely return the favour.

When a streamer on Twitch ends their stream, they will have two options. First, they can close the stream, which will force any viewers to switch to another channel by themselves. The second option for the streamer is to raid another stream. This will have the effect of forwarding the audience into that channel and boosting the audience of the second stream in the process.

Many Twitch streamers, especially those who are new to the platform, heavily rely on Twitch raids to increase their audience numbers. If you only get a limited number of viewers per stream, then a raid can significantly boost that number, especially if a bigger streamer raids a new streamer. This increases exposure and helps to grow the number of followers.

Besides being a kind gesture, it is also a two-way street. If you regularly raid other Twitch streamers, you will most likely receive the same raids back when their stream ends, and your stream is still active.

Furthermore, you do not need to worry about your raids being forgotten about. The Twitch interface allows streamers to view who raided their channel in the last 24 hours. This list can come in handy, especially if you are a streamer who wants to help a new channel grow. 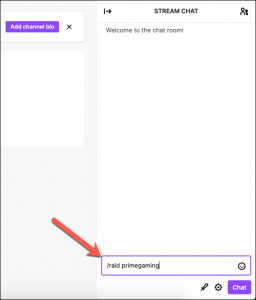 To raid someone on Twitch, use the following steps: