How to screen mirror iPhone to Samsung TV

Screen mirroring, which allows you to project material from one device’s screen to another, is a standard function on most modern technology. Screen mirroring is known by various names, but on Apple devices, it is known as AirPlay. 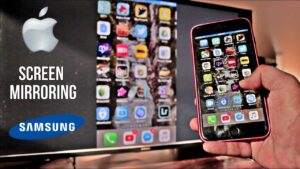 Though AirPlay is an Apple feature, it has been considerably easier to connect across device ecosystems since the release of AirPlay 2 in 2018. Whether you have a Samsung Smart TV from 2018 or later, you should be able to utilise AirPlay; check this list to verify if your model is included. If your Samsung TV doesn’t support AirPlay 2 or you prefer a connected connection, you can still mirror your screen with a lightning-to-HDMI converter.

You can use AirPlay on your iPhone in two ways: from the Control Center, pick “Screen Mirroring” to mirror your whole iPhone screen, or from within selected apps, click the AirPlay symbol to cast content from your iPhone to your TV. Alternatively, you may achieve the same effect by connecting your iPhone to your Samsung TV through an HDMI connection. This is how to do it.

On a Samsung TV, how do you switch on AirPlay?

Before you can utilise screen mirroring or AirPlay on your Samsung TV, make sure the feature is turned on.

What is the best way to AirPlay content from within apps?

Some major media services, such as Amazon Prime Video, HBO Max, and Hulu, offer an AirPlay option right in their applications if you don’t want to mirror your full phone screen to your TV. Unfortunately, Netflix’s in-app AirPlay feature is no longer available.

AirPlay is also available in several built-in iPhone apps, such as the Photos app, which may be found in the “Share” menu.

Twitter paves the way for the bitcoin price to surpass $300,000.

DISH and ADT announce their partnership.

Life Is Strange: Remastered Collection Is Set To Release In February 2022