When Apple released the iOS 11 platform, it also included a new function called Share Your WiFi. This feature allows you to share your WiFi network password with another user of an iOS 11 or later smartphone, as well as a Mac running macOS High Sierra or later. Continue reading to find out how to send a WiFi password from your Mac to your iPhone or vice versa. 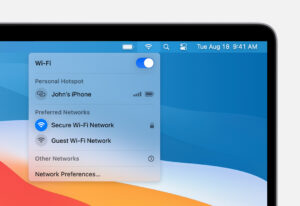 The Share Your WiFi feature, like many other iOS features, is only functional if the following conditions are met:

Check to determine which version your device is running on before proceeding to the real WiFi password exchange.

Simply follow these procedures to determine your Mac’s current version:

If the Software Update message says that your Mac is up to date, then macOS and all of its apps are already running on the latest version. Thus, WiFi Password sharing should be working as intended.

If your Mac’s Software Update notification says it’s up to date, macOS and all of its programmes are already on the most recent version. As a result, WiFi Password Sharing should operate as expected.

Follow these procedures to verify and examine the current software version of your iPhone or iPad:

Alternatively, go to Settings-> General-> Software Update to see if there are any updates available. If an update is available, read and study the information before continuing with the rest of the onscreen steps to upgrade your iOS device.

Remember to reboot your device after each update to ensure that any new system modifications are applied correctly and to refresh its memory and operating system.

After you’ve met all of the aforementioned conditions, you may start sharing your WiFi password. The following is how it works:

Ensure your device (Mac) is open and connected to the WiFi network if you’re the one sharing the WiFi password. Make certain that both Bluetooth and WiFi are turned on.

You can touch on someone’s WiFi-connected device without inputting the network password if the WiFi password sharing functionality is activated. You’ll be connected to the Internet after that.