How to stop apps from tracking you on Apple

Apple’s new App Tracking Transparency feature has finally been made available for iPhone and iPad users through the iOS 14.5 update. The new features will prevent companies such as Facebook, Google, or other applications that use your personal data from serving targeted advertisements. The new feature is a major issue as it directly impacts the business models of tech and business giants, as well other apps that rely on revenue generated by advertisements.

While this feature was unveiled last year at Apple’s annual WWDC, it finally made its way to users earlier this week. Apple has moved to IDFA (“Identifier of Advertising”) and has replaced the previous Unique Device Identifier which was employed by websites and apps to track users for targeted ads. Now, Apple is giving more control to iPhone/iPad users who want to restrict ad tracking on either certain apps or all apps that they use on their personal devices.

If you want to use the App Tracking Transparency feature, you will first have to update your iPhone or iPad to iOS 14.5. To do this, head to Settings > General > Software update. Once you have downloaded and installed the latest update of iOS 14.5, you can navigate to Settings > Privacy > Tracking.

Now, you will be able to disable “Allow Apps To Request to Track” if you do not want any of your installed apps to track you. However, if you want to give certain apps the permission to track you and your activities on your device, you will be required to leave the feature on. Each time you download a new app, you will get a pop-up notification asking you whether or not you wish to give it permission to track your activity while using the apps and websites other companies. If you would like to have more control on which apps should be allowed to track you, you can also manage specific apps that can track you from the Privacy menu. 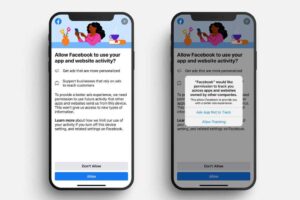