How to use Split screen on Android

Split-screen on Android may increase your productivity significantly, and it’s simple to set up on any device running Android 7 or later. 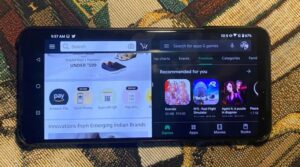 Sometimes you’ll want to perform two things on your phone at once, which is why knowing how to use split-screen on Android is essential.

Split-screen mode allows you to display two programmes on your screen side by side, allowing you to watch movies while working or read your emails while checking Twitter. It’s a great way to get the most out of your Android phone, but it may be a pain to set up if you’re unfamiliar with it.

Split-screen mode isn’t available in every programme, but Android makes it easy to figure out which ones do. In just a few seconds, you may be viewing a video while texting a buddy with this function. Regardless matter the phone you have, here’s how to utilise split-screen on Android.

We’ll go through both techniques individually because they change significantly depending on whether you utilise gesture-based navigation or buttons.

Both applications should be open, with each taking up half of the screen. Split-screen works in both orientations, so simply rotate your phone horizontally and the applications will realign themselves correctly. By dragging the line into position at the midway, you may resize the applications to a 75/25 split rather than 50/50 split.

That’s all there is to it; now go enjoy your enhanced Android productivity.