How to work around constant Chrome crashes on Windows 10

Arya RoyMay 22, 2021
How toTech
Over the past 24 hours, several users have posted on Reddit and other online forums, discussing issues with Google Chrome that is causing the browser to crash. Assuming from the multiple comments on Reddit, the problem seems to be affecting the browser on Windows 10.
People who have been experiencing these issues report that the browser either goes blank or a series of pop-ups appear on the screen, denoting problems with extensions. In some cases, the browser window crashes completely and takes users to the desktop of their device. Another user or Reddit posted a picture of their device which showed the desktop pop-ups for extension crashes. Even if users attempt to work on Google Chrome using an incognito tab, the bug continues to affect their device. 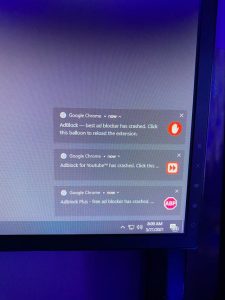 On Google’s online forums, one response seems to suggest that the issue has to do with the browser’s “User Data directory”. The user suggests that those who are experiencing crashes with the stable version might consider using the Beta version of the browser, which could mean that a potential solution will be made available for users of the stable channel soon after being tested in the Beta channel. Moreover, users might also try to run the Chrome installer to repair the install.
In their post, this user also provided an alternate workaround for the crashes. However, it is important to note that performing the workaround might cause users to lose any saved passwords and bookmarks. Therefore, it is recommended to back up data in the User Data folder before performing this workaround. For this workaround, use the steps given below:
As of this writing, it is not entirely clear as to when an official fix for the stable channel build will be released, or if a server-side change will be enough to solve this problem. As of now, if you are heavily reliant on Google Chrome, the above-mentioned workarounds may be the only way to get the browser to work. Additionally, Google has confirmed that a solution for this issue is now being made available to impacted users on Windows and Linux.
Until then, if you have been impacted on Windows, use the following procedure: