Solar energy has proved itself as one of the most sustainable and clean sources of energy available for utilization. As more and more attention and importance is being paid for sustainability, many organizations, scientists and researchers are devoting their time to capture this energy and to mold it for common usage. As a result of many such devoted attempts, hybrid solar system was born.

Hybrid solar system functions in the same way as any other solar power system but what sets it apart are the special hybrid inverters and batteries which are capable of storing energy for later use. This ability enables the hybrid solar systems to function as a backup power source during blackouts etc.

Naked Energy is one such company working in this direction. They were successful in manufacturing ‘Virtu’, an evacuated PVT (Photovoltaic Thermal Hybrid) collector. The company claims that ‘Virtu’ is a high efficiency solar collector which can generate both heat and electricity.

This product is capable of producing more energy per square meter at lower cost than any of its existing counterparts. The company Naked Energy was able to raise 5.2 million pounds of fundings in order to develop this product further. This product was developed in collaboration between the Imperial College London and Naked Energy to test initial prototypes and the concept.

Christophe Williams, Managing Director of Naked Energy said, “We are delighted to have completed our current funding round and look forward to an exciting new chapter. The new investment will support the long-anticipated commercial launch of Virtu. Scale production can now start in earnest with the first important step of independent certification of the technology. We are expanding our team and looking forward to entering into strategic international partnerships for the distribution of Virtu to end customers globally.” 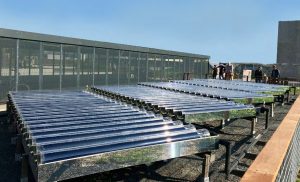 Having access to hybrid solar energy is always proves to be beneficial in many ways. They allow energy independence to the user, also they store the solar energy as a backup for later use. In this way all the energy collected during the peak hour is put to use in a optimal manner. All these benefits are provided with a battery life of around 7-15 years.

Virtu has successfully qualified the highest standards ensuring the products quality and reliability. In 2020 it received the Official Solar Keymark and the Solar Impulse Efficient Solutions label. Virtu is capable of generating both thermal and electrical energy. Also it allows the residual heat to be utilized for cleaning.

Virtu has been named as the world’s most efficient solar (PV) and thermal (PVT) panel for rooftops. The product functions by utilizing a solar thermal technology in a vacuum tube to reduce thermal losses. This product is highly compatible for operations in sectors such as, the hospitality sector or residential areas. It can also be utilized to assist in commercial and industrial projects which require a large amount of heat in its functioning.

Virtu can be highly efficient by consuming 50% less rooftop space as compared to its regular counter parts. This product is ideally used for flat roofs so that it can consume and store as much solar energy as possible. The product is also able to provide 300% better CO2 offset. The product is guaranteed to pay its consumers with 50% cost savings, says the experts.