Applied VR, a startup that uses virtual reality for the development of non-drug-based pain management has been landing major investments which will open a door of new opportunities and possibilities. With the infusion of these investments worth millions of dollars, six years of the startup’s efforts will soon reap fruit. The investments will also be of substantial help in gaining the approval of the US market. 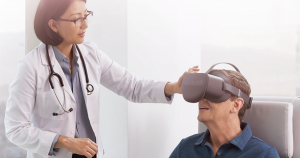 The startup uses a blend of virtual reality and cognitive behavioral therapy teamed with meditation exercises for its pain management therapy, which has been proving to be successful over the past few years. The therapy called EaseVRx achieved the US FDA special approval after a successful controlled study. The approval will be of monumental help to those suffering from critical medical conditions. This is a good example of how virtual reality is slowly moving towards a higher pedestal of applications from just gaming and entertainment. The therapy will be an absolute relief for fibromyalgia patients and for those suffering from chronic back pains.

The eight-week clinical study conducted by the startup indicated noticeable relief in patients who took part in the therapy. Once the therapy touches the point of success, it will prove to be a gamechanger in the field of healthcare and medicine.

Applied VR, recently landed a whopping amount of $29 million as Series A funding. This is in addition to the $35 million raised by the startup since its inception in 2015. Jazz Ventures Partners, Sway Ventures, F-Prime, GSR Ventures, Magnetic Ventures, and Cedar-Sinai were the participants in the Series A funding.

The startup plans to use the funding to accelerate its quest for full FDA approval, while also bracing the service for the ultimate market launch. The capital will also provide significant support for conducting further research and studies to place the therapy on a firm ground of effectiveness, thereby gaining trust from the people.

Since the method used is non-drug-based, it substantially reduces costs while also being convenient to use. Another major scoring point of the therapy is that it is easy and safe to use for the patient with the added advantage that it does not require a mandatory visit to the physician.

Applied VR at present is working with over 200 healthcare providers. Its partnership with the University of California at Francisco would hopefully bring forth new ways of providing affordable healthcare to everyone, especially those who aren’t in a privileged position right now when it comes to access and affordability. Digital therapies will play a major role in democratizing healthcare and making good healthcare available to all.