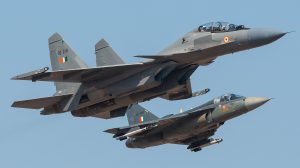 According to the reports from the IAF chief, the use of artificial intelligence in combat might require that certain traditional principles be abandoned or at least redefined to fit the altered environment. Different nations perceive threat and security in their own unique ways, in accordance with years of experience and these would require solutions that are tailor-made to fit their respective situations.

The IAF chief also remarked that they “have already started their work on AI-based formulation so as to come out with predictive maintenance or predictive threat scenario.” Even the management of the inventory of IAF has been computerized and digitized to fit the changing environment.

Applications based on artificial intelligence are being tested on various projects which are at different stages of development.

The training strategies are also being enhanced with the backing of artificial intelligence. Effectiveness is taken up a notch with the help of data recorders example that is, “being used to identify outliers in pilot performance, be it in operations, exercises using AI techniques to determine the strong and weak points in terms of maneuvering or overall orientation, etc,” according to the chief.

In order to derive maximum success from the technology used, it is necessary to decide when the system must be controlled by humans. This decision requires a good blend of technological logic and reasoning. This is because of the fact that humans are more suited for problem-solving while AI systems work better in situations where there are high correlations and underlying patterns.