Electronic Vehicle market is slowly taking shape in India. Many of the Indian youth are now getting aware of concepts such as sustainability and are sensitive towards environmental issues. The interest showcased from the consumers and the push given by the government has resulted in many electric vehicle startups budding in India.

These startups have some of the most brilliant minds behind then. The people who establish these companies are driven and are truly dedicated towards the issue. With that being said, it phenomena is considered to be vital when it comes to the development of the country as well as paying attention to the environmental causes. It also preaches a sense of entrepreneurism amongst young individuals.

One example is an ev startup from Mumbai named AlphaVector. This company was founded by Sachin Chopra and Vishal Chopra. Both the brothers hold a MBA degree from The Wharton School of the University of Pennsylvania, which is considered to be one of the top management collages in the world.

Earlier this year, the company launched its first e bicycle, Meraki by Ninety One. The company claims that this bike is a “100% indigenously designed and engineered in India”.

While speaking about their journey, Vishal Chopra said that, “As graduates from Wharton, both of us led corporate lives in Silicon Valley. However, we were always excited to pick up our bicycles and explore.”

He further adds that, “While growing up we spent our time cycling outside. Unfortunately, we never saw our children leave their couches or gadgets to explore nature and breathe fresh air. Backed by a desire to see our children step outside and our collective passion for cycling, AlphaVector was born in 2015.” 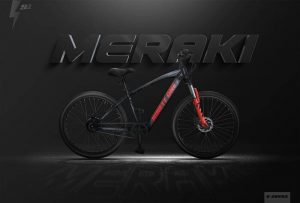 Meraki by Ninety One is currently priced at Rs 29,999. This bike was made by more than 15 designers who bring with them a combined work experience of over 300 years in total. This is massive. With such extensive amount of experience and the amount of thought process that has gone into it, this bike is sure to raise eyebrows of the onlookers.

The bike took over 15 months to take shape. The entire process took place from scratch. The team carried out all the functions such as designing, prototyping, landing the bike on the right components and the geometries.

Speaking about the features of Meraki by Ninety One, Vishal Chopra says that, “Most e-bicycles in the market are regular bikes that have a battery pack, motor, controller retrofitted to an existing bicycle frame. Meraki, on the other hand, is a well-researched and engineered offering at an affordable price. We have essentially designed the frame from scratch. The entire battery has been integrated into the frame of the bicycle.”

He further adds that, “The e-part of the bicycle has been built on a state-of-the-art platform where we are using Panasonic battery cells with 100% safety record that gives you about 35km on a single charge (full charge in 2.5 hours), which has a life of about 2,000 charge cycles.”

Meraki by Ninety One is equipped with a 250 watt, IP 65 BLDC motor which is also waterproof and has a top speed of 25 kmph. It also comes with a 6.36 AH lithium ion battery which comes with a warranty of one year. This bike also has a key lock switch; this prevents any sort of tempering with the bike as it cannot start without a key.