The Inspiration4 mission’s crew, which happens to be the first all-civilian crew to be launched into orbit around the Earth, has safely returned home. The mission comes as the latest in what seems to be a growing list of endeavors to send billionaires to space, and was organized by Elon Musk’s SpaceX, a pioneer of the commercial astro-tourism industry.

Once the crew hit home ground, Inspiration4’s mission director, Todd “Leif” Ericson held a conference call with the press, welcoming them to the “second space age.” The venture was carried out completely by SpaceX itself, right from the supply of the craft and its launch, to the control of the flight and its eventual splashdown/recovery.

The three-day mission was completed successfully on Sunday at 2300 GMT (4:30 p.m. IST), with the Crew Dragon capsule, together with its passengers, underwent an “automated re-entry descent” to hit the calm seas, the spectacle being livestreamed by SpaceX on its YouTube channel.

The team had blasted off into space from the Kennedy Space Center at Cape Canaveral on Wednesday, with the Crew Dragon capsule being boarded atop a Falcon 9 rocket, from SpaceX’s two-stage reusable line.

As the vessel plunged down into the Earth’s surface, temperatures went up to 3,500 degrees Fahrenheit. To protect the astronauts from being scorched should the cabin heat up, their flight suits were equipped with special ventilation systems.

The scientists at SpaceX’s LA-based control center watched on as the flight’s speed was slowed down to some 15 miles per hour as it lowered its altitude.

Shortly after, the quartet comprising the crew emerged from the capsule’s side hatch, smiling, following the vehicle being hoisted onto a SpaceX recovery vessel’s deck. Jared Isaacman, the billionaire funder of the venture, as well as the crew leader, along with his crew mates, physician assistant Haley Arceneaux, geoscientist Sian Proctor, and data engineer Chris Sembroski, were subjected to medical checkups on deck, before being flown back to Cape Canaveral via helicopter. 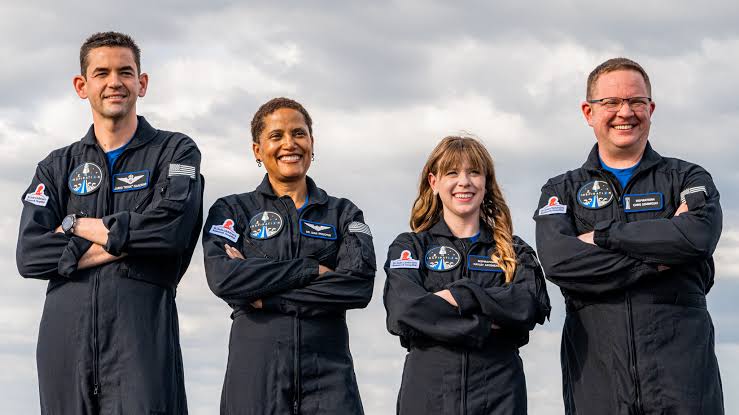 Isaacman, who also happens to the be the CEO of e-commerce company Shift4 Payments Inc., called the voyage “a heck of a ride,” while adding that they’re “just getting started.” The sum paid by him to Musk for the trip is undisclosed, but Time magazine places it at somewhere around $200 million.

Interestingly, the mission also reached heights higher than rhe International Space Station or the Hubble Space Telescope, hitting 363 miles in just three hours, the farthest away from the Earth that humans have gone since the Apollo moon mission in 1972.