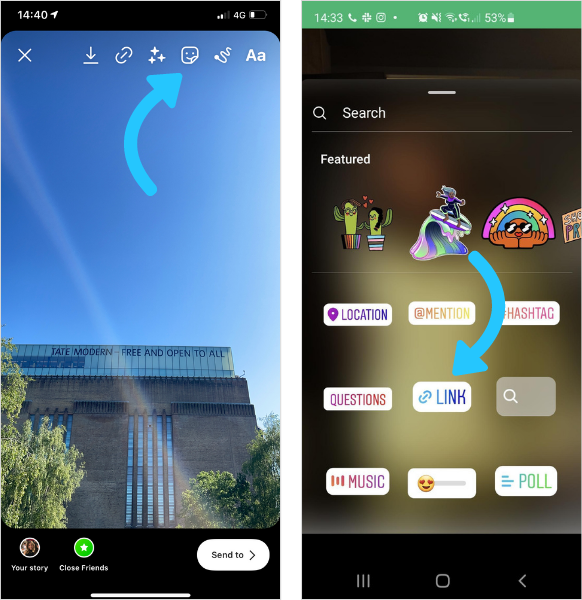 Instagram, the Facebook-owned social media platform is hands-down the most popular social media platform on the internet, it has been for a long time now and with the company adding in new features to keep people engaged, the is unlikely for Instagram to come down from its throne anytime soon.

Having said that, Instagram has a weird relationship with letting users share links on their Stories and it has somehow managed to keep it an exclusive feature by allowing only users with more than 10K followers or verified accounts. Not anymore! Instagram is reportedly testing to allow more users to share links on their stories and for the longest time, it has been allowing only a selected bunch of users to use this feature. For users who are eligible to add links on their Instagram Stories, it is done so with a Swipe-up link feature but according to recent reports, the social media platform is trying out a new Sticker to add links on Stories.

Stories Stickers are reportedly the next big thing for Instagram users because, according to the company, Stickers will involve great new features for Instagram users in the near future.  As mentioned in a report by Engadget, Instagram’s head of product, Vishal Shal told The Verge that the company is still testing the feature and the goal, for now, is to track what kinds of links people share on the platform. Facebook Inc. has been very open about its policies regarding the spread of misinformation on its platforms and in order to keep those practices in check, letting every Instagram user share links on their stories can turn out to be a disaster for the company. Vishal Shah commented on the matter saying that Instagram has t ensure that people don’t use the feature to push misinformation and spam content on the platform.

Furthermore, Shah added that the company’s transition to Stickers as the primary way for users to access third-party websites is sort of a future system that the social media giant would like to get to, as mentioned in a report by Engadget. Instagram is growing and it is growing rapidly with new features and big improvements. Until last week, there was no posting allowed from Instagram’s desktop website and reports confirm that the platform is soon, to begin with the testing.

Instagram “kind-of” got really hyped up with all the boost that TikTok users gave to Reels and now users are using this short-video platform to create the best content, doing a great job in keeping people engaged with the platform.