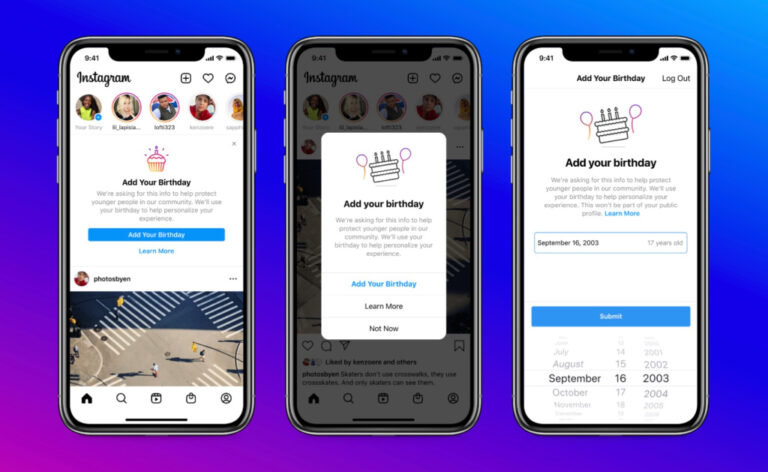 Instagram is one of the world’s largest and most popular social media platforms. Its growth over the years has been phenomenal, so much so, that it has become a serious threat to Facebook’s core social media application. Having said that, as good as social media is for adults in being up-to-date with day-to-day events, it is equally having a negative impact on teenagers and young adults, and Instagram has been questioned multiple times on account of its measures for teenage safety on its platform.

Following the scrutiny and by Facebook Inc.’s own goodwill, Instagram has decided to tighten the ropes and take another measure in ensuring teenage safety on its platform. According to recent reports, Instagram will require users to share their birthdays as an update that is meant to protect young users from viewing sensitive content on the platform.

Since 2019, Instagram is asking for users’ birthdays during the sign-up process but those who have joined before 2019 will now be prompted to provide their birthdays for teenage safety and protection purposes, another step in the company’s attempt to make Instagram safe for young adults.

So basically, a young teenager will not be able to view these posts at all, an attempt by Instagram to make its platform safer for young teenagers. However, it is unreal to believe that all users will provide with their real birthdays and in order to scrutinize that, the company will harness an Artificial Intelligence technology that will show users a menu of options to verify their age, as mentioned in a report by Engadget, but the company says that this technology is still in the works.

As a part of Facebook Inc. and Instagram’s plan to make their social media platforms safe for young teenagers, the company had previously auto-switched young teenager’s accounts to private with an option to undo it, but it has also recently introduced features that limit an advertiser’s capacity to target this demographic, something which has been effective and was an absolute necessity.

Other than this, not very long ago, Facebook Inc. had released reports saying that it is planning to develop a separate app for users below the age group of 13 but the company was prompted not to pursue this project from lawmakers over parents’ concerns and social media’s effect on children’s minds at such a tender age.