During a test of an airborne high-power laser weapon, Israel’s Ministry of Defense successfully intercepted multiple drones, the ministry announced. The showcased system is being described as “a strategic change in the air defense capabilities of the State of Israel” and may contribute crucial capabilities to the multi-layered integrated air defense system of Israel. The new high-performance laser was tested toward UAVs, authorities involved in the demonstration have explained that the technology is also designed to counter rocket attacks.

Multiple unmanned aerial vehicles (UAVs) were intercepted and destroyed above a test range with the new airborne laser technology, according to a press release featuring the announcement. The device is visible on a Cessna 208 Caravan behind a windowed panel on the left side of the aircraft’s rear fuselage, according to a video published online. Although limited details about the laser system’s capabilities have been revealed, Brig. Gen. Yaniv Rotem, DDR&D’s Head of Research and Development, concluded that the system successfully intercepted drones at a range of more than 1km. 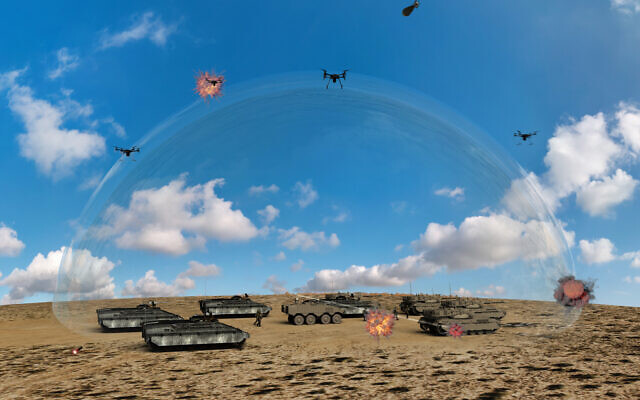 While airborne laser systems are carried aboard aircraft and can be quickly transported between places, they have advantages over ground-based laser systems. When compared to a stationary system, this allows more flexibility in responding to UAV threats wherever they may appear, as well as more coverage over a far broader area.

In addition, unlike ground-based counter-drone systems, airborne counter-drone systems will be less affected by atmospheric disturbance. In general, laser-directed energy weapons have drawbacks, such as being particularly vulnerable to atmospheric conditions, clouds, and fog. Size, weight, thermal loads, and power, as with any weapon system, limit how effective it is against potential threats and even how widely it can be deployed on different aircraft.

Despite the fact that Israel’s Ministry of Defense has previously stated that laser systems do not work well in bad weather or through cloud cover, the new airborne laser system is claimed to be able to “effectively intercept long-range threats at high altitudes regardless of weather conditions.” Considering the possibility for significant up-front procurement and research and development expenses, laser systems offer advantages over kinetic interceptors in that their cost-per-intercept is much lower.

During a crisis, Israel might deploy multiple more advanced versions of this technology in the air above critical places like Gaza or along the Lebanon border, thus offering anti-drone screening in a very efficient package. In the future, transitioning the functionality to an unmanned system would be perfect, allowing for a persistent drone defense system.