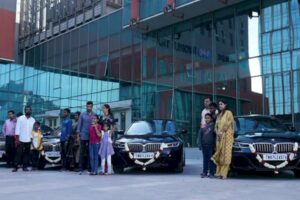 Recent occurrences at an IT company in India proves how loyalty from employees always gets rewarded. Reportedly, five employees of a software firm based in the city came across a similar situation for being loyal to their firm and superiors. Apparently, they helped their boss in ‘digging gold’ and aided the country survive the storm that was the Covid-19 pandemic.

On Friday, April 8 Global software-as-a-service firm Kissflow Inc awarded more than five BMW vehicles, each of which were worth Rs. 1 crore. The awards were to its executives in the senior management as a reward for their commitment and loyalty to the IT company.

The ceremony held for handing over the rewards was kept private, as some of the recipients of the award were not even aware of the honour they were receiving. They were notified only hours prior to the event that they were about to be proud owners of the luxury vehicles of the German automobile. Friday afternoon being the last working day, many were unaware of the event. Many other staffers were curious about possible acquisitions or infusion of funds. The Chief Executive of the firm, Suresh Sambandam stated that these five staffers were with him like pillars of support. This was since the inception of the firm, standing by him at the time of the ongoing journey.

“There were difficult times. Even during the pandemic, the investors were not sure whether this company will sustain and build a future. Today we are very happy that we have paid back the investors and now it has become a fully owned privately held company,” he said.

Sambandam stated how some of these five employees came from humble backgrounds, having gone through many challenges prior to joining the firm. Moreover, even the company experienced many hardships on its journey at the time of the pandemic. During which, certain investors even raised doubts about the company being possibly unable to function successfully.

The 530d BMW models were presented in consecutive order to the recipients, along with their families present. The CEO, who owns a BMW 6 series himself, remarked how these awards were for those who stood by him when he “dug 100 feet of gold.” He referred to the time when other employees left the firm while these stood by. Additionally, Sambandam mentioned he wants this to inspire other employees to support the firm.