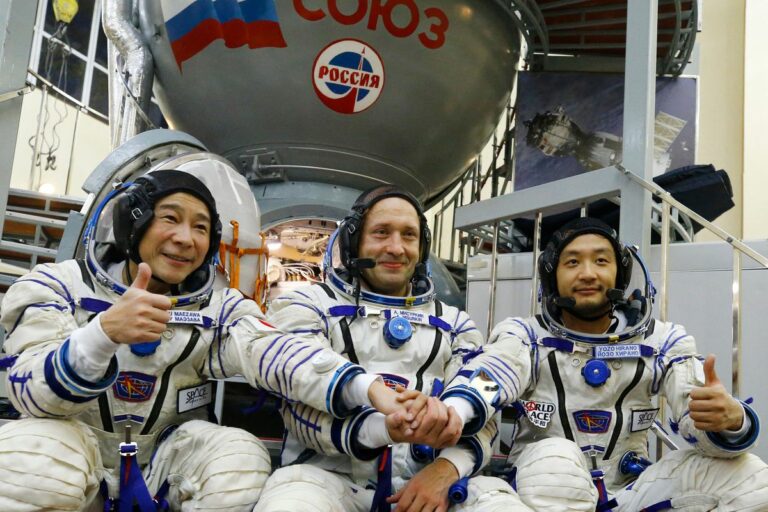 Japanese Billionaire Yusaku Maezawa and two colleagues who were launched to space on December 8th will be returning to earth tonight at 9 PM EST. The two crewmates are Yozo Hirano and Roscosmos cosmonaut Alexander Misurkin. The Russian Soyuz spacecraft is scheduled to land on earth the steppes of Kazakhstan Sunday at 10:18 p.m. EST.

The departure procedure can be watched from the International Station Station (ISS). It will kick off with the hatches between the Soyuz and station being closed at around 3:30 p.m. EST (1830 GMT). It can also be watched directly via the space agency. The following details are the major aspects of the launch timings,

The crew consists of a Russian cosmonaut and two Japanese space tourists. One of the tourists on board is Yusaku Maezawa, a Japanese billionaire. Maezawa announced his intention to fly around the Moon on SpaceX’s last year, in the future Starship rocket one day.  Maezawa and Hirano went to the ISS through a partnership with Space Adventures. It is a company that brokers trip to space for paying tourists. In the early 2000s, Space Adventures helped orchestrate trips to the ISS on Russia’s Soyuz spacecraft for seven people. However, later they paused flights since 2022 after the retirement of NASA’s Space Shuttle. As the space agency needed seats on Russia’s Soyuz rockets to get US astronauts and international partners to the ISS, more people were not sent to space.

Maezawa posted various videos of himself in space, like challenges to eating snacks in space, sleeping in zero gravity, time-lapse of earth’s orbit, etc. While Maezawa initially planned to go in SpaceX Starship, it looks like SpaceX still has some time before its first human launch in Starship will happen. So Maezawa went through Space Adventures, which also acknowledge the public awareness of space tourism. In an interview with the media, Tom Shelley, the company’s president stated, “It’s certainly within the high tens of millions of dollars. When we were doing this 10, 15 years ago … many people were just not aware that flying to space as a private citizen was possible. But now — come 2021 — there really is a heightened awareness within the market, and so the discussion is different.”

Going on my space journey from Dec. 8 to 20. The International Space Station (ISS) will be my home for the two weeks. I’ll be tweeting my diary along with #MZJourneytoSpace

As tweeted, there are many documentations from both Maezawa and Hirano about their trip to space. Hirano documented their performance of health and performance research activities. It was added to the small database of information available for non-professional astronauts.