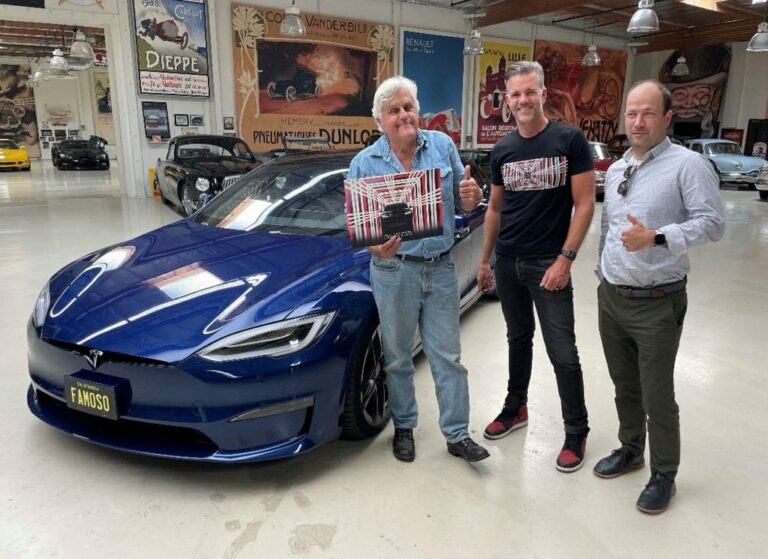 Tesla Model S Plaid will make its debut on TV on November 10, 2021, on the show “Jay Leno’s Garage”. The former late-night TV show host will be behind the wheel at Famoso Raceway. Tesla Model S Plaid broke the 1/4th mile record on the same raceway dethroning Bugatti Chiron Sport.

The “Limited Edition” episode was stated by CNBC as, “Get ready to regale yourself with rarities in this extremely Limited Edition of Jay Leno’s Garage. First up, Jay and talk show phenom Trevor Noah test-drive the lightning-fast, all-new, all-electric Mercedes EQS. Then Jay does his damnedest to demolish the already ludicrous world record for the fastest production vehicle ever in Tesla’s all-new Model S Plaid. After attempting to rewrite history, Jay squeezes Comedian Tom Segura into a bug-size Bugatti, lets loose in a one-of-a-kind Porsche Carrera Coupe, and rides off into the sunset with actor Balthazar Getty in a ridiculously rare Lamborghini Sian.”

Jay Leno’s Garage show is an award-winning series that gives car reviews, motorcycle reviews, and many more. They do reviews on supercars, classic cars, vintage cars, restored cars, and sports cars. It is known for winning the award Primetime Emmy Award in 2016. Commentary by Leno started on April 15, 2020.

Back in 2014, the Tesla Model S making was shown in the documentary, “How it’s Made: Dream cars”. From its birthplace to revealing the inner workings were all revealed in the show. Now in 2021, Tesla Model S Plaid deliveries started and are now making their first TV debut.

Some rumors say that the record time was 9.247-second 1/4 mile at 152 miles per hour. It was known that Leno was there in the location during the time when the vehicle broke the record. On an episode of Spike’s Car Radio podcast, Leno confirmed that the record was set. He said, “I’ll tell you what I did. I went up to Famoso Dragway in Bakersfield and the Tesla Plaid…I drove by, and the NHRA guy was there to make it official. It turned a 9.247, at 152 MPH.”

A trailer showed that Leno would drive the vehicle himself, possibly trying to attempt the driving record. In the past, Leno and Tesla CEO Elon Musk had many interactions. So that gives Leno special access to some of the most interesting designs in Tesla.

In an interview with Shepard Smith, Leno said, “It was a winner. I mean, it is now the fastest production car you can buy. Faster than any Ferrari, faster than any $3.5 million Bugatti.”