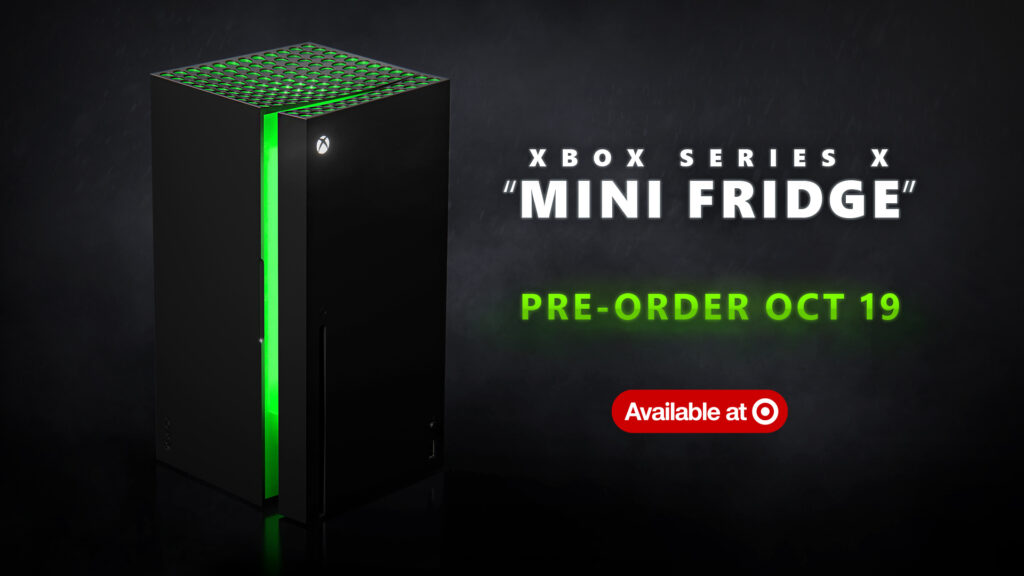 Microsoft’s Xbox Series X-shaped mini fridge will be up for pre next week. The Xbox Mini Fridge will cost $99.99 (£89.99 / €99) and will go on sold in the U.s., United Kingdom, and Europe on October 19th. Microsoft has worked with Target in the United States, Game in the United Kingdom, and GameStop EU, Micromania, or Toynk in Europe to bring the mini-fridge to market in December. In Canada, the Xbox Gear Shop will offer the fridge, and Microsoft stated presale information will be available “very soon.”

The Xbox Mini Fridge has a capacity of 12 cans of drinks and two snack shelves inside the door. It also has a USB connector on the front for charging devices and a DC power converter to make it portable. The mini-fridge was first revealed earlier this year at E3 when Microsoft vowed to make one after Skittles won a Twitter poll.

The Xbox Mini Fridge is the result of Microsoft capitalizing on the early jokes about the Xbox Series X’s boxy, fridge-like look. Microsoft has made light of the shape, announcing at E3 the “world’s most powerful small fridge” with “Xbox Velocity Cooling Architecture.” Microsoft even gave out a full-sized Series X-shaped refrigerator last year.

The Xbox Series X Mini Fridge is exactly what it sounds like: a little refrigerator intended to look like an Xbox Series X, with a capacity of ten 12-ounce Coke cans and two door-mounted snack racks. The Mini Fridge also has a USB port on the front that may be used to charge electrical devices.

You Voted For It. Now We’re Making Your Xbox Series X “Mini Fridge” a Reality. Pre-Orders start October 19th. Available at retail in December for $99 (£89/€99). Details below on first wave of units this holiday across 10 global markets. #XboxAndChill🥶 https://t.co/WWjI58heyP pic.twitter.com/KB7tVuvNfq

The Mini Fridge was developed in conjunction with Ukonic, a Las Vegas-based manufacturing firm. Ukonic creates items for Microsoft’s Minecraft and the forthcoming Halo Infinite, as well as a variety of Disney and Marvel tie-ins.