According to JPMorgan research, Bitcoin, the world’s largest cryptocurrency, is displacing gold as an inflation hedge. This has contributed to the current rise in bitcoin’s price. The Bitcoin Strategy ETF, which became the first ETF to exceed $1 billion in assets under management (AUM) in less than a year, has sparked a flurry of activity in the cryptocurrency space. 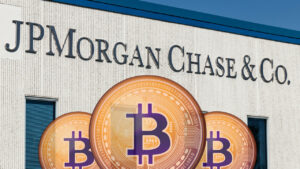 It also highlighted gold exchange-traded funds (ETFs) and their downward trajectory over the past six months. According to a recent investor report published by JPMorgan, investors are increasingly choosing Bitcoin over gold as a hedge against inflation.

“The re-emergence of inflation fears among investors has re-ignited interest in the use of bitcoin as an inflation hedge,” according to the research. Investing in gold ETFs has dropped by more than $40.8 billion over this time period.

Asia, in contrast to America and Europe, which saw the majority of the outflows, saw a net influx of $135 million. The SPDR Gold Shares ETF, the iShares Gold Trust, and the SPDR Gold MiniShares Trust have all lost 6% so far this year, according to the ETF Database.

This year, ProShares Ultra Gold, which is ranked ninth in terms of total AUM, has lost 15%. Bitcoin-related goods, on the other hand, have witnessed consistent inflows across all markets, including the stock market. To give you an example, Bitcoin got $69.6 million in inflows during the week of October 15.

Bitcoin-backed items received a total of $225 million in the previous seven months, the most in the sector. The total value of Bitcoin assets under control currently stands at $72.32 billion. According to JP Morgan’s analysis, “there are tentative indicators that the earlier trend away from gold toward Bitcoin, which happened over much of Q4 2020 and the beginning of 2021, has begun to re-emerge in recent weeks.”

Bitcoin’s annual Return on Investment (ROI) has increased by 90 percent this year, whilst gold’s annual ROI has decreased by 7 percent. With a 786.8 percent rate of return, Ethereum has delivered an even better return on investment.

Fear of rising interest rates and inflation has apparently gripped gold ETF investors, resulting in a wave of panic selling, according to sources. Aside from Bitcoin, they appear to be investing in cryptocurrency derivatives such as the ProShares Bitcoin ETF, which was launched on October 18.

Bitcoin’s return on investment (ROI) has surged as a result of these factors, with its price jumping past $67,000 on Wednesday. “The recent decision by the SEC to authorize a futures-based ETF in the United States might stimulate more substantial inflows in the coming weeks, as US investors continue to boost holdings,” CoinShares said in a statement.