Everything to know about Kena: Bridge Of Spirits

Kena: Bridge Of Spirits is undoubtedly one of the most stunning video game releases of 2021. The game is developed by a small studio named Ember Labs in L.A. The action-adventure game was purely digital release, until recently the developers showed plans to have a physical release. Players assume the role of Kena, a young ghost leader who is on a quest to uncover the mystery story of the demise of an ancient village. Players disarm enemies, unlock new abilities, unlock secrets, and restore the beauty of the land using staff and their collection of tiny companions known as Red. This action story-driven adventure takes players on a journey of self-discovery as Kena restores balance in the village and thrives in the surrounding area.

Not only cute creatures are hidden, tiny creatures know as red, will disarm enemies, unlock new abilities, uncover secrets and restore the beauty of the land as the protagonist Kena fulfills her duties as a spirit guide. Kena has a series of puzzles and spirits companions known as reds that show different ways to perform certain actions, such as moving objects and shape changes. The information about the PS5 physical version of the game just came today, it will include the highly anticipated photo mode and is slated to release in November.

Early prototypes of the game focused on the Reds as an antagonist, but not on the full release. To explore more of this concept, the Kena team alone made it stronger and more powerful than the Red team. A Game Informer interview with Ember Labs provides an example where the player uses a spirit companion to shape a broken bridge to cross a gap.

Lead Character Designer Vic Kun designed Kena’s look to suit the world and stand out. A trailer released recently ends with a desperate struggle against a mysterious masked figure who seems to cast doubt on Kena’s ghost leader and the whole thing, but we’ll have to wait to find out if he’s the problem. A second trailer gave fans a more complete look of the world, with smoother animation.

Kena is not an open-world game, but there is plenty of space to discover hidden secrets, unlock achievements and learn interesting characters, and if you missed it, you can travel to any part of the world – but when it comes to battle the game is not as easy as it looks – Kena can equip her magical things, transform into a bow, upgrade and use ghost arrows to recharge. It also has an arsenal of mental abilities, such as a pulse bubble to parry incoming attacks, and it can summon ghost dragons to create additional combat muscles.

In combat, simple melee combos with light and heavy attacks are executed with Kena’s magic wand. The player uses Kena, a young ghost guide who uses her magic abilities to help deceased human people move through the physical and spiritual worlds, as a staff to attack enemies,, and Kena’s Pulse capability to defend herself against attacks. In order to defend themselves against enemies, the player can activate Kena’s pulse ability, which serves as a protective shield when the health meter is exhausted by an attack [3], and it also serves to give hints on how to activate objects. 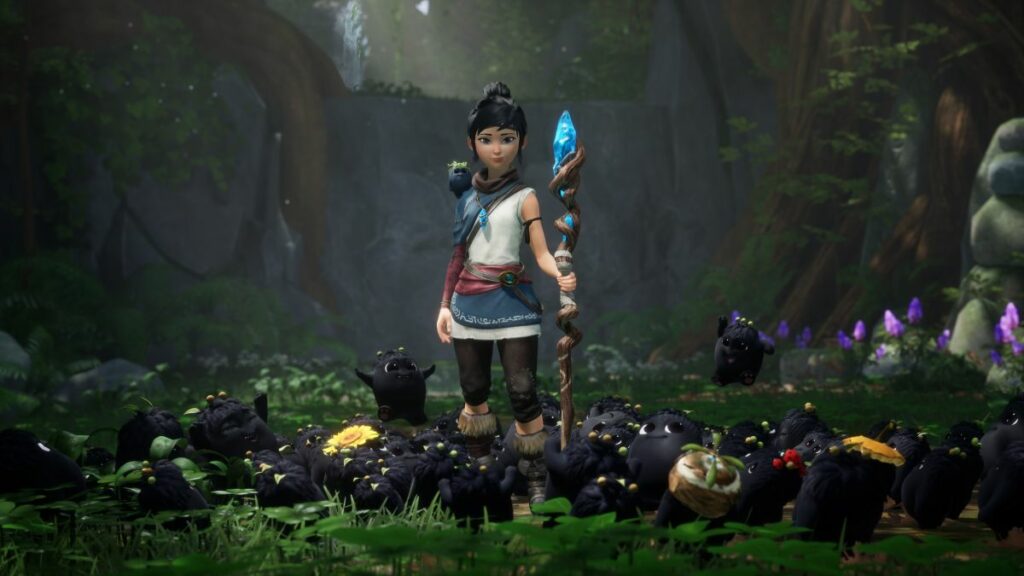 The story follows Kena, a young girl who finds herself in a ruined village that was hit by a terrible catastrophe many years ago, who will use her magical powers to help deceased people transition from the physical to the spiritual world and restore the village by leading ghosts from one kingdom to another. Through them, the player helps ghosts fight their regrets and deal with unfinished tasks.

The little fluffy creatures are spiritual companions that Kena collects during the course of the game to help her free the world from the darkness, solve puzzles and defeat enemies; they can be directed to various positions, move objects and take certain forms in battle. In addition, Kena can connect with critters through cattle markings to help them fight and solve puzzles.

Former Game Informer editor Jeff Cork summed up Kena’s world design in our cover story as “broad and linear.”. Kena lacks many powers, and he relies on rot to do tasks that Mike Grier likened to the 2009 Game Boy game His Blob. It should not be forgotten that Kena is not an open-world game. As mentioned above, the villages serve as hubs from which players can travel to other areas, and Ember Labs describes it as a wide linear game.