Konzum, the largest food manufacturer and retailer in the Western Balkans, has become the first retail chain in Croatia to accept digital assets as payment. Such transactions are currently only available in the company’s online store, but the company aims to expand the service to all of its supermarkets shortly. 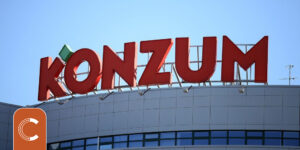 In addition, during the Christmas holidays, Newegg, the top tech-focused North American e-retailer, announced that Shiba Inu (SHIB) will be accepted as a method of payment on its platform. Nothing, a consumer technology business based in London, will also accept cryptocurrency payments for its newest product.

Cryptocurrency Takes Over The Balkan Peninsula

Konzum, Croatia’s largest grocery chain with over 10,000 employees, has announced that it will enter the cryptocurrency market by taking a variety of digital currencies as payment. Bitcoin (BTC), Ether (ETH), Bitcoin Cash (BCH), Ripple (XRP), Stellar (XLM), Dai (DAI), EOS (EOS), Tether (USDT), and USD Coin are some of these cryptocurrencies (USDC).

Konzum collaborated with Croatian fintech business Electrocoin and its PayCek system, which is known as Croatia’s first cryptocurrency payment processor, to facilitate such payments. Because most digital tokens are volatile, the latter will guarantee the buyer a set exchange rate at the start of the transaction and allow ample time for successful execution.

Uroš Kalinić a member of Konzum’s Finance and IT Management Board, stated that Konzum is always following worldwide trends, with the cryptocurrency business being one of them. “As the largest retail chain in Croatia, which in its almost 65-year history is a continuous leader in the domestic market in terms of business results and technological achievements, we are proud to be leaders in another area that is rapidly developing and dictating the future,” he summarized.

Konzum is not just Croatia’s largest grocery chain, but also the largest in the Western Balkans. It extends to two other nations, Bosnia and Herzegovina and Serbia, in addition to its homeland. The retail behemoth serves over 650,000 consumers every day across its 700 locations, with Bitcoin being available in a few of them in the coming months.

Newegg is another significant e-commerce corporation that has recently accepted new digital asset settlements. The California-based company, which began accepting Bitcoin as a form of payment in 2014, has now added Shiba Inu (SHIB) to its list of recognized digital assets. It made the announcement official by showing it on The Reef in downtown Los Angeles, which is North America’s largest DOOH billboard.

Newegg was one of the first companies in the world to take SHIB’s main competitor, Dogecoin, earlier this year (DOGE). It later incorporated Litecoin as well (LTC).

Customers are quite interested in cryptocurrencies, according to Andrew Choi, the company’s Director of Brand Marketing. Giving customers the option of paying with bitcoin or different coins gives them “more flexibility.”

The payment method is offered in the following countries: the United Kingdom, the United States, Canada, Belgium, France, Germany, Greece, Italy, and Japan.