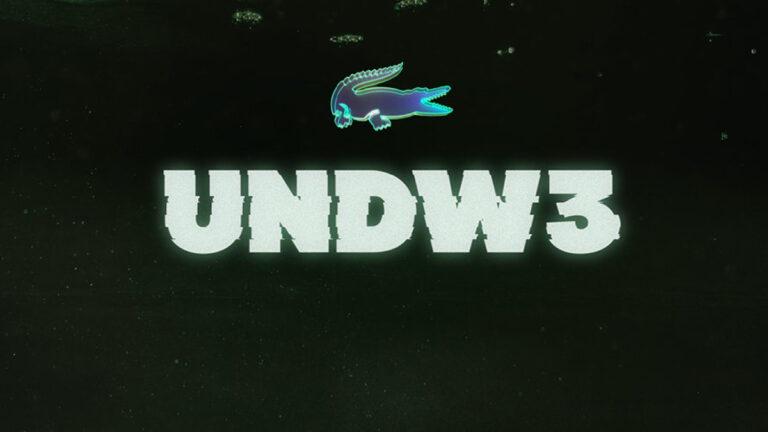 With the “Undw3” idea, Lacoste makes its first foray into the world of next-generation fabrics. The crocodile insignia, which is readily identifiable as belonging to the company, was the driving force behind the “underwater” collection. This collection includes Web3 technology, thus the crocodile logo has been changed to better represent the cutting-edge character of the collection.

An unnerving image of an enormous crocodile coming from deep in the water is shown by NFTs, and it is a sight that terrifies viewers. It costs 0.08 ETH for each of Lacoste’s 11,212 digital pieces of the brand’s polo shirt that they are selling at the time this story was published. The L1212 L1212 Polo shirt range from Lacoste includes these items. Catherine Spindler, Lacoste’s chief brand officer, said in an official announcement that “Undw3 attests to our aim to follow the phenomena of decentralization pioneered by Web3 and bears witness to our goals in this field.” We want to follow the decentralization movement started by Web3 by using Undw3 as our abbreviation for “attests to our objective to follow the decentralization movement.” This is shown by Lacoste’s description of Undw3 as “an immersive, participative, and co-creative universe.” Lacoste’s devotion to innovation may be seen in Undw3 as well. Lacoste designed Undw3.

The Lacoste brand used the social networking tool Twitter to spread the following: “We believe that you would be an exceptional addition to our core team and make a big contribution to its success if you were to join us. We hope that this will help us better connect with our consumers, both those who shop with us in our brick-and-mortar locations and those who do so online. Customers that purchase from us online as well as in our physical stores are all part of our customer base.” Participating in the Lacoste experience and making it your own will lead to an invitation to join the Lacoste family and a chance to influence the company’s future direction. Additionally, NFT holders will be able to exert some degree of control on future commodity creations, which is an exciting prospect for those who own NFTs. They will be able to make purchases of one-of-a-kind tangible things thanks to this feature.

For some time now, the organization has been seriously considering the idea of moving to Web3 technology. It was feasible owing to cooperation between Web3 and Minecraft, and Croco Island was made available to Minecraft users in March of this year. If you have any questions about “Undw3,” please don’t hesitate to contact Premint.