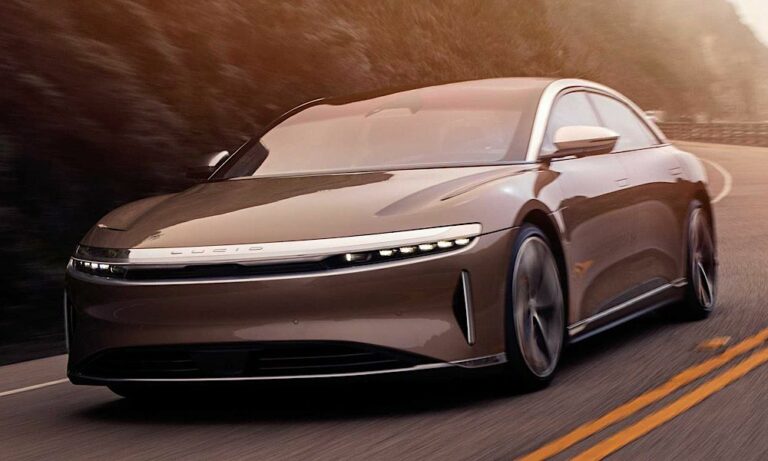 Recently Lucid Motors revealed its $250,000 Air Sapphire, which is a rather cheaper version of the earlier launched vehicles. Lucid’s senior vice president of design and brand, Derek Jenkins told the Air Pure that, “all of the development of the high-end cars has trickled down to this car at a better entry-level price, but still with pretty remarkable specifications.”

Lucid has not officially acknowledged that it is working on a third model, after the Air sedan and Gravity SUV, although it did possibly show the vehicle under a cover in one video. We’re not exactly sure which video the screen captures are taken from, but they show Derek Jenkins and Lucid CEO Peter Rawlinson walking around three cars. One is an Air, another is a Gravity SUV that’s under a car cover, but the third vehicle (also under a cover) is not an Air. It looks like a sedan, a smaller one, with a different shape to its roof compared to the Air. It could very well fit the bill for the $50,000 sedan and the fact that it’s there suggests design work on it is complete.

$LCID We already know the Gravity will be shown at the 11/15 event, will this car in the middle looks smaller than Air will be shown as "some surprise?" pic.twitter.com/ddFDg7pE5K

Lucid only sold six-figure versions of the Air electric sedan, but that changed last week with the introduction of the $89,050 Pure variant alongside the slightly pricier $109,050 Touring model. The new cheaper model is expected to cost around $50,000 and is expected to debut within this decade. The company is still proud that it managed to bring the Air’s cost down to be able to sell it below $100,000 while also not turning it into a barebones car. It still comes well equipped, missing out on the panoramic glass roof and the range drops to 410 miles.

It is visible through the cover that even though the rear end is more fastback-like to the Air’s more traditional sedan proportions, the front end of the mystery model appears similar to the Air, with intakes that go through the hood in pretty much the same place. From the front, it does look a lot like an Air, but with that different back section, it isn’t one.

But before Lucid can announce a third model, it has to successfully ramp up production of the Air, then launch and then ramp up production of the Gravity SUV. One will be able to reserve an example of the latter starting sometime early next year, with first deliveries expected to commence in 2024. Lucid is also in the process of expanding its home factory in Casa Grande, Arizona.