VeVe is a premium licensed digital collectibles marketplace with an app. Users can purchase, sell, and exchange digital treasures with other VeVe users, as well as customize and present them in virtual showrooms. 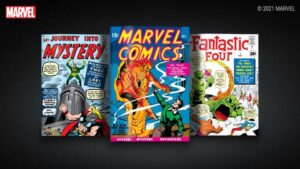 The whole issue of each comic may be read via the VeVe app and is available in blind boxes for $6.99. From Common to Secret Rare, unlock one of five levels of rarity! Start your collection tomorrow when MARVEL COMICS #1 is released, and don’t miss the rest of the week’s releases. The Spider-Man Digital Statues sold out in less than 24 hours, and the Captain America Marvel Mighty Figures sold out in less than 20 minutes!

“Marvel has been working with VeVe to figure out how to make the Marvel digital collecting experience as unique as the physical experience, and we are thrilled to finally be able to share our vision with our fans,” said Daniel Fink, Vice President of Business Development and Strategy at Marvel Entertainment. “We plan to push the frontiers of what Marvel fandom can be through VeVe’s platform, starting with personal and interactive digital artifacts that, thanks to NFTs, fans can really collect, share, and enjoy in ways they have never been able to before.”

The following is the release schedule for the first series of classic Marvel comic books:

Each digital comic book will have FIVE versions of rarity:

MARVEL COMICS #1 will be the first Marvel digital comic released as an NFT, as it was the first comic published by Marvel (then known as Timely) in 1939. The original, android Human Torch, and Namor the Sub-Mariner make their initial appearances in this issue.

Loki, Heimdall, and Asgard make their debut appearances in JOURNEY INTO MYSTERY #85.

The first appearance of the Fantastic Four is featured in FANTASTIC FOUR  by Stan Lee and Jack Kirby, which kicks off the Marvel Age of comics, which revolutionized narrative and continues to have a significant influence on modern culture.

Also read: Lloyds, is looking for a digital currency expert