The Fisker Karma is popular for its range-extended electric sports sedan, released in 2014. Later, the name was changed to Karma Automotives when they allied with a Chinese battery manufacturer, Wanxiang. It is a hybrid model, running through either gas or electricity.

The new methanol-powered car would be GSe-6, which was supposed to be fully electric. Later, hydrogen was used and the company claims to have found a better way to use Methanol. Unlike gas and, petrol, methanol is available directly in many countries. There is no carrier barrier or weight barrier with methanol-powered cars.

Blue world technologies is a Danish-based fuel cell developer and manufacturer. It is a two-year-old company making its journey to reduce the consumption of other fuels which emit carbon gases. Now, both companies are exploring making methanol-based commercial vehicles.

In an interview with the CCO, Madis Friiis Jensen, said, “We are very excited about the collaboration with Karma and see great potential in combining their expertise within hybridization and powertrain solutions with our flexible fuel cell concept that is suitable for both engine bay or skateboard platform integration, said Mads Friis Jensen, CCO, and Co-founder of Blue World Technologies.” 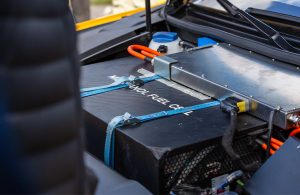 With the alliance of Blue world technologies and Karma, the expected result is to be better than a normal methanol-powered vehicle. Replacing the combustion fuel cell won’t do the trick. The car is expected to be out by December 2021, after its testing in Denmark and the US.

Though there are no details about the technology used in Karma, Methanol has great advantages compared to hydrogen. The fuel can be made from other renewable energy resources like solar energy. As per the standard theory, it would be beneficial to use renewable energy indirect form, rather than conversion. However, the ability to store energy and use it in any form is intriguing.

Blue world Technologies have worked on making compatible methanol fuel cells. These are expected to be lighter and more convenient to use. With the bulk usage of these fuel cells, this option could be preferable till electric vehicles pave their path in the future.

Finally, cost-effectiveness matters, Blue world technologies produce much cheaper Methanol. Lithium batteries are the reason for the high costs of electric vehicles. Additionally, the smart EVs have concerns with semi-conductor chips being not available. If not for the coming 50 years, this method, if works, can be used for a decade or more.