Microsoft to sell HoloLens- based headsets to the US Army 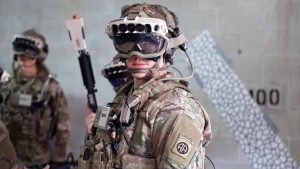 The US Army would now have in its arsenal, HoloLens-based headsets. The tech giant, Microsoft has bagged a contract to supply the US Army with 120,000 headsets. If the estimates are accurate, then, in ten years’ time, the worth of the contract could go up to $21.88 billion. The company has been working with the army since 2018 and over the past two years, tests were run on the Integrated Visual Augmentation System(IVAS) headsets. High-resolution night, thermal and soldier-borne sensors are incorporated into the heads-up display by the devices.

Integrated Visual Augmentation system makes use of augmented reality and machine learning to provide a mixed reality training environment that is almost life-like so that the Close Combat Force(CCF) can rehearse in advance thereby sharpening their skillset before engaging actual adversaries. The earlier design which faced criticism due to its poor performance with respect to sensors and GPS has now undergone considerable transformation, upgrading it and deeming it useful for army use. As per the reports from the Army, the new, ruggedized version of the heads-up display can enable armored vehicle operators to even see through walls!

The system was on its third iteration in October 2020. A test was conducted to collect soldier feedback, using a ruggedized version of the system that filled the gaps of the earlier tests which used Microsoft HoloLens 2. The system was then refined to fit the needs and requirements of the battlefield.

Microsoft and the US Army

In 2018, Microsoft had won a contract worth $479 million to supply its HoloLens augmented reality headset to the US Army. Though this particular move was met with a lot of resistance especially from Microsoft employees, it didn’t stall the collaboration of the United States Department of Defense and Microsoft. This collaboration has finally reaped fruit in the form of this Soldier centered design which facilitates “rapid prototyping of a product to provide Soldiers with tools and capabilities necessary to achieve their mission,” according to Microsoft HoloLens inventor, Alex Kipman. 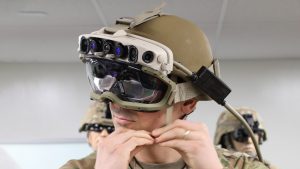 Though the HoloLens hasn’t witnessed any significant changes in relation to hardware, the company has been building on the software while also improving the gesture movements of the headsets. And with the addition of Microsoft Mesh, the up-gradation and improvement processes have received a significant boost. Microsoft Mesh is supposedly capable of supporting ‘Holoportation,’ as the company calls it which enables people to appear as their real-life selves in a virtual space.

While the improvements and results are on the way, things are heating up in the extended reality landscape, with burning possibilities and scope. One-fifth of Facebook’s employees are reportedly engaged in work related to VR and AR. And Apple recently charged its former boss the job of overseeing VR and AR, while more prototypes are making their appearance from different companies like Samsung, Snap, Qualcomm, and many others.