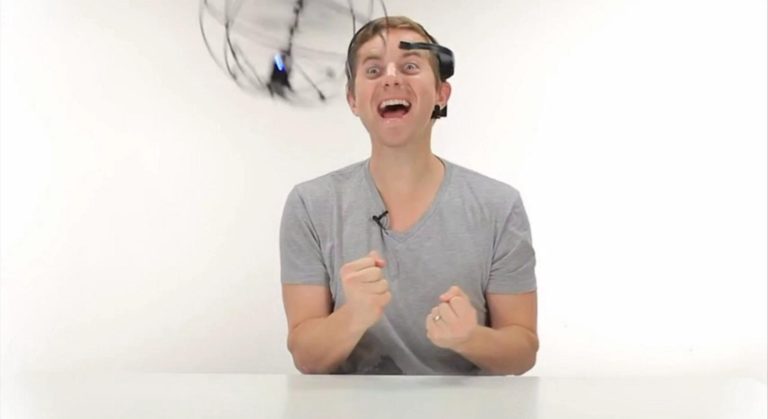 The Force Is Strong With You – Mind Controlled Drones ! 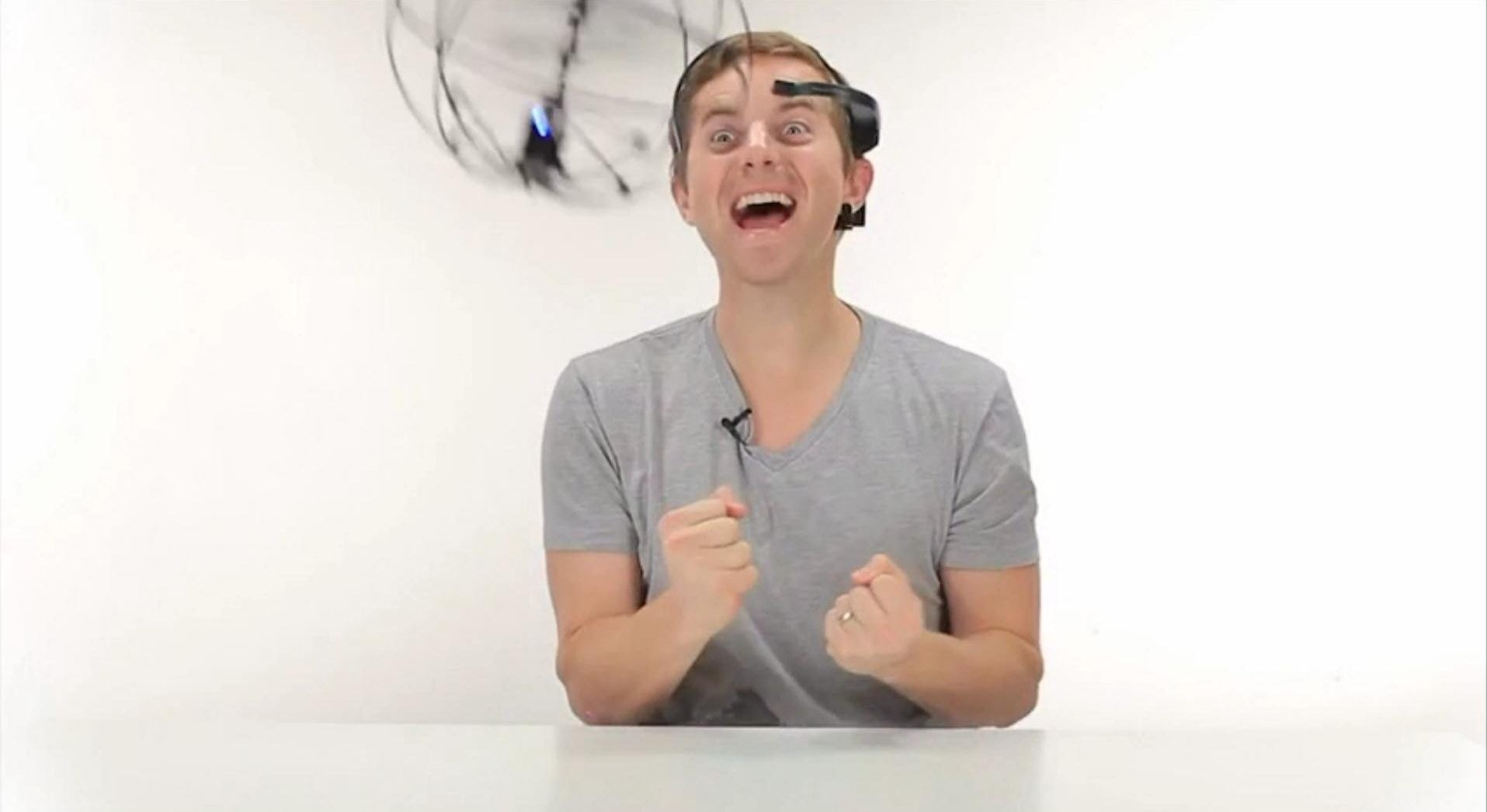 Who doesn’t like star wars? Telekinesis using your force is a childhood (Ahem! Not really) fantasy for every single fan. What if you can control a drone with just your thoughts? Now isn’t that like using the force? Let us take a look at the technology that is making this possible.

There are three parts to this, one is the research at Arizona state university, another is a Portuguese company both have the same technology but their timelines are different. The third is an interesting mind controlled drone race that took part in the Florida University.

An engineering professor at Arizona State University is developing technology that would allow an Air Force pilot to control an entire fleet of drones using his mind.

Panagiotis Artemiadis runs the university’s Human-Oriented Robotics and Control Lab, where researchers seek to understand and improve interactions between humans and robots. The lab was awarded grants totaling $860,000 from the Defense Advanced Research Projects Agency and U.S. Air Force in 2014  to build out the mind-control technology.

“Ten or 20 years from now, instead of having big expensive aircraft or drones, you can have hundreds or thousands of inexpensive ones you deploy in an area,” Artemiadis said. “Even if you lose half of them, you can still achieve your goals.”

And those drones can be controlled, at least in part, with the human mind, he said. The pilot wears what looks like a high-tech swimmer’s cap, equipped with 128 electrodes that detect brainwaves. The electrodes identify where thoughts originate in the brain and determine the pilot’s intended commands, and then those commands are communicated to the robots via Bluetooth.

A pilot can instruct a cluster of flying drones or terrestrial vehicles to move in a certain direction, spread out over a larger area, or circle around a specific target. To date, one subject has been able to control as many as four drones inside of the lab, Artemiadis said. The project will soon move to a 5,000-square-foot facility where researchers hope to increase that number to 20 and eventually into the hundreds.

“It’s a matter of getting good signals with cheap and portable electrodes. Once you have this, you can definitely do this outdoors if you want,” says Artemiadis.

Before you picture X-Men-style warfare, Artemiadis said he does not expect mind control to completely replace pilots’ joysticks and computers — at least for the time being. Controlling robots completely with one’s mind requires a high degree of concentration that may be difficult to conjure on the battlefield.

But Artemiadis added there ultimately may be applications beyond defense, such as humanitarian aid distribution, package delivery, or search and rescue operations.

“We are adding more degrees of freedom and more capabilities,” he added.

Check the video below which show the capabilities of the drone.

A company has successfully flown a mind controlled drone, a step that its scientists say will lead to passenger carrying airplanes steered only by pilots’ brains.

In a rather stunning demonstration, Portuguese business Tekever fitted a special cap to a pilot to measure his brain activity, allowing him to steer a drone through a mission in the sky using his thoughts alone.

The company’s eventual target for the drone technology is applying it to pilots flying private and commercial aircraft using their minds alone, but it acknowledges there is a lot of work ahead.

For the test demonstration, in order to steer the drone, pilot Nuno Loureiro focused entirely on simple thoughts within set formats, which he learned during extensive training. This means the drone received clear signals, from his brain waves, that it could process quickly.

“This is an amazing, high-risk and high-payoff project,” Tekever chief operating officer Ricardo Mendes said at the launch. The project needs extensive further technology development, he explained, but added that it “represents the beginning of a tremendous step change in the aviation field, empowering pilots and de-risking missions”.

Key benefits include allowing pilots to focus on the many advanced in-air processes while more simply controlling an aircraft, which the company describes as being akin to how professional sportspeople need to focus on tactical aspects of movement without worrying about maintaining basic game skills.

The University of Florida held the world’s first race of mind-controlled drones on April 16, igniting exciting opportunities for such futuristic interface outside of the laboratory.

The competition enlisted 16 participants, who used nothing but willpower to drive the drones across a 10-yard indoor basketball court.

Brain Computer Interface (BCI) is a technology that enables humans to manipulate machines using their thoughts.

Such technology used to be aligned in the medical field, with some paralyzed people already helped by mind-controlled limb prosthetics.

Chris Crawford, a PhD student from the university says, however, that to broaden the use of BCI to the public, experts have to fully accept these consumer brand devices and push them as far as possible.

Indeed, the technology has become so increasingly popular and now, widely available. In fact, headsets from startups NeuroSky and Emotiv used for BCI can now be bought online for a several hundred dollars.

The pilots wear electroencephalogram (EEG) headsets, which are fine-tuned to determine the electrical activity linked with specific thoughts in the brain. For example, it will identify where brain cells fire when the EEG headset wearer imagines a pushing table across the floor.

The programmers will then write codes to turn these signals into commands that the computer will send to the drones.

The competition drew praises from experts. One of them is University of Minnesota’s Dr. Bin He, who first presented a mind-controlled drone in 2013.

“The progress of the BCI field has been faster than I had thought ten years ago,” he says. “We are getting closer and closer to broad application.”

Other Applications of BCI

Juan Gilbert, the professor of the students who organized the race, says people’s lives are becoming more reliant on Internet-based devices. With this, he and his team would like to explore how mind-controlled devices can advance and alter the way people work, have fun and live.

The possibilities with these devices are endless – they may be used to unlock the house door, take a step into the virtual world and monitor people’s moods, among many others.

Gilbert says the day might come when people could don a brain-controlled gadget like a watch to interact with things in the surroundings.

If you have interesting insights on the research work in mind controlled drones space, do share with us in the comments section !