Minus Zero established in 2020, is the first start-up in India to work on autonomous cars. Also, they are working on making an affordable self-driving car. Unlike Google or Tesla, Minus Zero is focusing on Indian roads, where the infrastructure is often not convenient for a fuel-based vehicle. 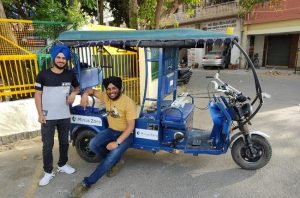 As the photograph shows, the three-wheeler looks like a typical auto-rickshaw in India. Minus Zero is not fully developed in terms of design, however, in the performance levels, it has improved and has the scope to have a longer range and speed.

Minus Zero is situated in Jalandhar, Panjab with a research department in Patiala. Being a company that was founded during the Pandemic, they achieved a lot. As, they claim to have a level 5 technology that is highly efficient, yet less dependent on costly AI and data-driven software. Their AI is based on nature-inspired.

In an interview with Analytics Magazine, the CEO and CTO of Minus Zero said,

“Our fully Autonomous Electric Cars will be able to drive autonomously in highly unstructured and disorganized traffic scenarios like India’s. Ranged between INR 16-25 lakhs, the vehicle will cater to the needs of Generation Z, with a hybrid sports design and high performance at a competitively affordable price. There will be a lot of features which we will reveal over time.”

The natured-inspired AI is not using woods and air but is based on predictive behavior, seeing the unseen. Alongside, their system doesn’t compromise on accuracy, they use 10x lesser GFLOPS for each frame to achieve high-speed processing.

Though there is no need for much better technology involving long-range Lidars, the three-wheeler has produced good results.

Goals for the company

The known goal of Minus Zero is to provide high-tech self-driving vehicles in an affordable price range. Their recent test drive was successful for 2.2 km with a speed of 20km/hour. The other conditions included regular Indian roads and medium traffic levels.

Gagandeep Reehal, the CEO stated his goals as,

“Our whole focus and energy are devoted to bringing the product into the market as early as possible. As mentioned earlier, we will be launching a market-ready version of our product by late 2023. Also, file for a regulatory testing post that. We will launch a set number of our initial models in some specified cities and monitor it closely. Along with that, our R&D team will continue to make improvements. Also, bring updates to our self-driving software. We will begin mass-scale production after a successful launch in the specified cities. And thereafter, ship out the products throughout India. We hope to achieve our target sales of 5,000 units by late 2025.”

The Youtube video uploaded by Minus Zero shows their whole 2.2km trip where a passenger drives without a driver in the driving seat. From afar, it looks like a pun or a trick someone is playing, but the self-driving car is a magic of its own.