MoneyGram has teamed up with Stellar

MoneyGram, an international remittance service, is dipping its toes back into the blockchain pool. On October 6, 2021, the firm announced a new cooperation with the Stellar Foundation to establish a payments bridge that speeds money transfers and enables near-instant settlement in USDC, Circle’s stablecoin pegged to the US dollar.

MoneyGram has teamed up with the Stellar Development Foundation, a non-profit organization dedicated to the development of Stellar, a blockchain network that allows for cross-border transactions. The Stellar network runs on the XLM token, which is currently trading at $0.327 and has a market capitalization of $7.8 billion.

This is Moneygram’s second attempt to improve its service using blockchain. Stellar is a direct competitor to Ripple, which was founded after Jed McCaleb, a co-founder of Ripple, left the firm owing to philosophical differences and focused solely on his project.

Stellar Lumens (XLM), Stellar’s native cryptocurrency, saw a significant increase, completing the day with a 12 percent+ gain, aided by Bitcoin’s stellar performance. With a daily high of $0.364 and a low of $0.31, XLM opened the day at $0.31 and closed it at $0.357.

Moneygram and Ripple established cooperation in 2019. In exchange for providing Ripple an equity position in the company, Moneygram would use the RippleNet as part of the exchange settlements process for international remittances, getting financial incentives in the form of XRP. 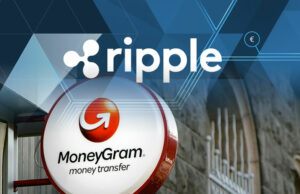 After the SEC formally began a legal proceeding against Ripple, accusing it of utilizing XRP to create unregistered securities, the cooperation came to an end in March 2021.

According to Denelle Dixon, CEO and executive director of the Stellar Development Foundation, MoneyGram’s network will integrate with the Stellar blockchain to enable cash funding and payout in multiple currencies, including the US dollar and the Japanese yen, using USD Coin (USDC), a stablecoin governed by Coinbase and Circle through the Centre consortium. USD Coin was launched on Stellar in February after being designed on the Ethereum network.

Customers will be able to convert cash into and out of USDC at MoneyGram locations for immediate pickup. United Texas Bank, a Dallas-based FDIC-insured bank, will handle settlement between Circle and MoneyGram on the backend. The service is set to start in a few locations by the end of the year, with wider international deployment in 2022, however, no other specifics, such as pricing, have been revealed.