MrBeast, or Jimmy Donaldson, YouTube’s most generous philanthropist, is back with a new project, and it’s safe to say that the entire community is behind him. MrBeast intends to save the seas by eliminating 30 million pounds of trash from the water (rivers, beaches) by January 1, 2022, after planting 20 million trees with the support of his admirers, Internet strangers, and even tech magnate Elon Musk.

You might wonder how that’s feasible. The website set up to gather donations from individuals all around the world claims, “#TeamSeas is a global drive to raise $30 million to remove 30 million pounds of plastic and waste from our ocean, rivers, and beaches.”

#TeamSeas has teamed up with Ocean Conservancy and The Ocean Cleanup, spearheaded by former NASA engineer and current YouTuber Mark Rober and Jimmy. According to the website, all donations will be shared between the two groups. 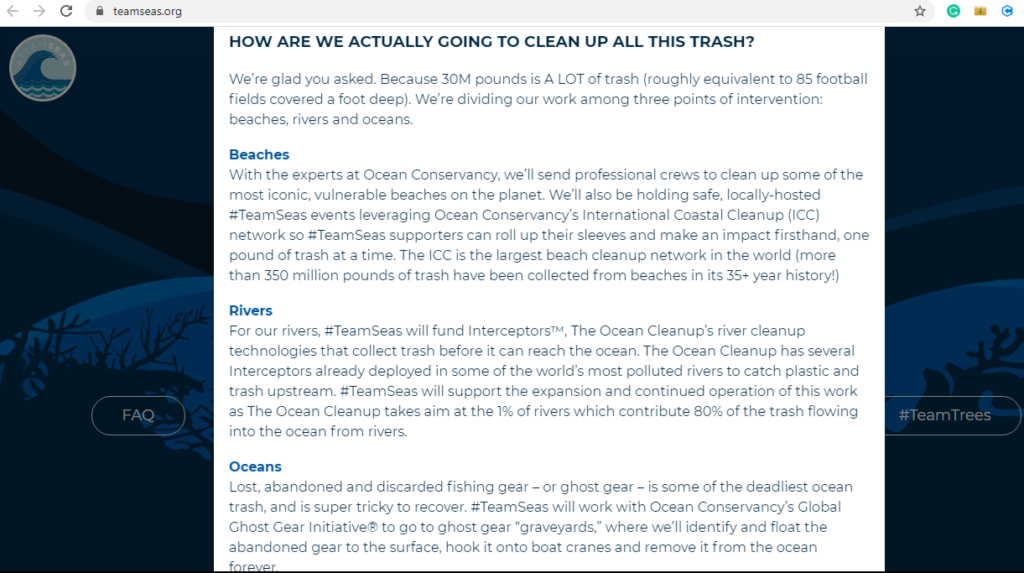 The website also states that the project, which is as large as #TeamSeas, has been divided into three categories: beaches, rivers, and oceans, in order to swiftly complete the necessary chores.

MrBeast’s announcement to save the seas was viewed 2 crore times in a video uploaded only a day ago. “Let’s show the world that we want to clean up the ocean,” Jimmy says after cleaning up the “world’s dirtiest beach” with the support of a large number of volunteers.

“The plastic pollution problem is so big that no single solution will fix it at once. But we’ve got to start somewhere. 30M pounds of trash collected is 30M pounds of trash that won’t come face to face with whales, dolphins, seabirds and other beloved wildlife, and that won’t keep breaking down into smaller and smaller pieces, ending up on our dinner plates,” the website states.

A simple search on YouTube reveals that hundreds of creators have already volunteered to help MrBeast’s effort by creating videos, which the YouTuber thanked on his Twitter page.

SHOUTOUT TO THE THOUSANDS OF CREATORS THAT MADE A VIDEO SUPPORTING TEAMSEAS! I LOVE YOU

Jimmy Donaldson, 23, has done everything from buying all the automobiles in a dealership to tipping waiters hundreds of dollars, adopting all the dogs at a shelter, opening a free bank for strangers, and buying billboards to assist PewDiePie in his sub war against T-Series.

MrBeast promised to give away ten cents for every subscriber he earned in 2021 in a video posted earlier this year.