New Robot Inspired by Pufferfish PufferBot, Can Fly and Expand its Body

An expandable structure has been developed by a collaboration between researchers at the University of Colorado Boulder’s ATLAS Institute and University of Calgary. This structure is actuated and expandable in nature and can be utilized for developing shape changing aerial robots. A new robot named PufferBot has been developed by making use of this structure.

Hooman Hedayati who is one of the researchers that carried out this study said that, “One of the major goals of our research is to address a longstanding problem in robotics, which is that robots remain extremely difficult for people to work with.”

They also added that, “There are several reasons for this, including human inexperience with robots, safety issues that robots introduce, and a lack of consideration regarding how humans and robots can effectively communicate. All of these issues are compounded when we consider aerial robots (i.e., drones).”

A paper containing details about the study was set to be presented at the 2020 IEEE/RSJ International Conference on Intelligent Robotics and Systems (IROS).

Hedayati and his colleagues aim to find out different strategies that will enable robotics to ‘redesign’ and alter the traditional structure of the drones, through their recent study. The researchers derived their inspiration from the pufferfish.

The pufferfish has expanding qualities and also certain biological characteristics that sparked an interest among the researchers. With this inspiration the team came up with a new structure that would enable drones to rapidly change the shape by expanding and contracting.

Hooman Hedayati explained that, “Our design offers several new communicative properties and potential safety benefits, as in the case of a collision or crash, the expandable structure can reduce impacts to both the robot and whatever the robot hits.”

He further adds that, “PufferBot has a one-degree-of-freedom actuator that controls the size and stiffness of an expandable structure that surrounds a drone. For example, when the drone is flying through a cluttered space or if it is about to collide with an object, the actuator can deploy the structure to protect the drone by covering its propellers and internal electronics.” 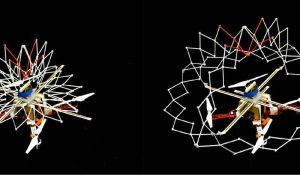 The structure designed by the researchers demonstrates similar behaviour like an airbag in vehicles. This means that it can provide many more advantages than just conventional drone designs. Since it is similar to an airbag, it can be used to minimise the amount of damage suffered by a robot when colliding with objects in its path.

Compared to the current systems which make use of the static power guard, the structure developed in this study can be adjusted and can be of different sizes which also means that it does not reduce a drones maneuverability.

This structure can also be utilized as a communication tool. It enables the robots to change their size and appearance significantly such as shrinking and expanding. So a drone can be programmed to expand when it detects a specific type of danger or a stimulus in its surroundings. This can be used to provide warning to humans from a distance.

Hooman Hedayati said, “Going forward, we are interested in exploring how actuated, expandable structures, such as those used in PufferBot, can support human-robot interactions by enabling robots to be more expressive.”

While adding further he said, “In particular, we want to study how such structures might enable a robot to use new types of ‘gestures’ to convey information such as, ‘don’t come close’ or ‘you should go in this direction,’ etc. to humans.”