Now keep all your apps in one app with ‘No More Tension’! 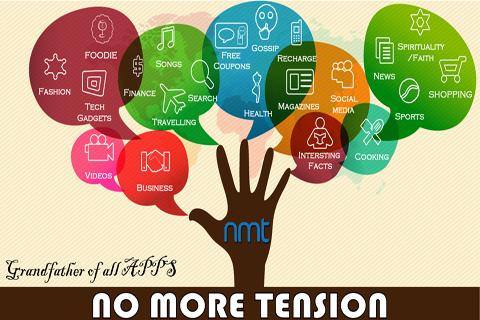 According to figures from eMarketer, the number of smartphone users worldwide is expected to exceed 2 billion in 2016 i.e. one-quarter of the global population will be using smartphones.

As per the statistics of statista.com, 1.4 million apps were available to download from Play Store by February, 2015. There are plenty of apps available for user to download from the pool including Shopping, News, Travelling, Gossip, Fashion, Magazines, Tech, Automobiles, Songs, and Videos etc. leaving the user in a state of dilemma. A general user would look into the ratings and reviews from already existing users while prioritizing which app to download. However, that ‘general user’ fails to realize that what fits best for someone might not suit him the best.

So what do we do to tackle this? Well! Most of us keep downloading the apps, starting from top of the list heading towards bottom, until we reach to the ‘perfect app’.

But how about an app which presents you with most used top websites of a particular category when you click on that category? All you need to do is download just that one single app and you will have ‘No More Tension’ to download any other frequently used app.  Very convenient, right?

But the question which would be boggling your mind now is ‘Does an app like this exist’? Yes. No More Tension is that one app which has all the important websites inside it. It is an android application which is specifically divided into 24 categories like shopping, travelling, magazines etc. Inside each category there are top websites with respect to that category; for example, If you click on ‘Shopping’ then new window following the click takes you to window containing Amazon, Snapdeal, Shopclues and other 15 top websites which are promising , used on a daily basis and sometimes even some start-ups. Similarly, inside ‘Travelling’ you will find Easemytrip, Cleartrip etc. which are daily used along with the few new ones!

Moreover, all the websites are mobile optimized which enables easier and hassle-free browsing experience. There are options to like these websites and also write testimonials and reviews for them!

The No More Tension Journey ! 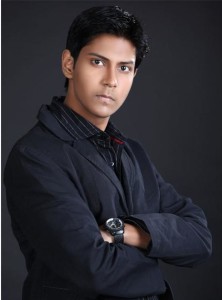 NMT is inception of Kunal Saraff who got inspired from grandfathers of the country to start  this venture. Kunal is a graduate from Delhi and is now based in Kolkata. He, along  with NMT also runs a NGO The Saviours which arranges blood donors in emergency! He is  also an author of a to be published novel theyoungestbillionaire.co.

Kunal in an interview with Techstory explains “The idea of NMT came in my mind  when I felt that although The Senior Citizens wish to use the tabs and the iPads  in their house but do not know where to go and what to type. In an interview, even  Mr. Amitabh Bachchan said that although he wishes to be tech friendly but it is really hard  for him to cope up! I had have always noticed the hunger they had in knowing about the world of internet and online shopping etc. All these things together acted and infused a thought in me to build a product which is actually useful for the senior citizens”.

Kunal wanted to build a product where the net browsing would be available just on 2 clicks with there being no need to type for the daily used websites. Just as its name, Kunal decided to develop this app to make Internet friendlier and be at the finger-tips of the senior citizens! He wished to ensure that they are able to browse almost everything just on two clicks.

The app was launched in April, 2014. However, the app underwent its final rework on the bugs and other up-gradation of features, after which it was launched again in May, 2015.

Although the history behind this application was to promote internet among the senior citizens of our country who wish to explore the world of internet but do not know where to go and how to work things out, the app received a phenomenal response even from the youth of the country. It received an average rating of 4.8 on the Playstore from its 115 users.

This success derives its root from the fact that there is no such other app on the Playstore with the same functions. The product is not only for daily use but also for people who are willing to explore new arenas in the web world. Also, it is much easier to load various sites as the internet speed has upgraded to 3G and even 4G and also that the time taken to open a link inside the app is not much from the time taken to use an app itself. “The actual fiddling habit of the people to use their mobile and fiddle every second leads them to click on this app, after which they get engrossed. It makes the users aware of new webs coming up in respective categories and tech freaks would love to explore.” People who wish to have different apps for the same purpose can now just download this and remove the rest i.e. if you want to read Forbes and India Today, then in regular sense, you have to have both their apps, but with NMT instead you could just have the app and remove the need of rest.

NMT is a multi-utility app which falls under news section, entertainment as well as under productivity category. There is no direct competition to this mobile application as it is the 1st of its kind!

NMT has a current team size of four including Kunal and 3 other tech developers. But Journey for Kunal with NMT was not an easy one.  Finding the right team was the most difficult issue. Kunal changed three developers before in order to get the best talent. Also, the app was not a hit initially as its prospective customers were not online. Online marketing was not much fruitful. “One thing I learned in this project was that the market of your product has to be well-defined and known. At times our perception may fail, therefore a real ground market research is a must!” Another critical challenge till was finding bugs after every up-gradation.  But with the time, NMT continuously added features to its list and solved all the bugs and officially launched in Jan, 2015 after which there was a phenomenal response from the youth of the country as well. The team is still in the process of overcoming the marketing aspect.

Currently, NMT is trying to exploit the youth market as well as the senior citizens who wish to be tech friendly and love to explore the web world! “Expectations are to get more users to use this app. Not just the senior citizens but youths should also be using it daily. We are trying to tap the fiddling habit of the youth, where instead of just stalking fb profiles, they could get into reading and surfing.” Right now NMT has 4000+ active users of the app and wish to take it to 50,000 soon!