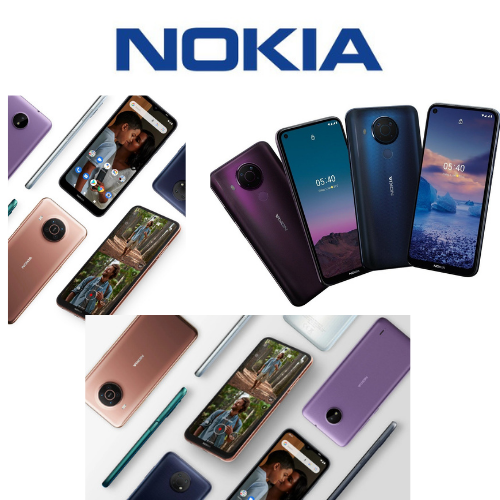 Nokia to come up with 6 new budget phones soon.

Nokia is upsetting the status quo. HMD Global, Nokia’s parent company, has unveiled a total of six new Nokia-branded handsets, divided into three new series of smartphones, each featuring two models. The new phones will replace Nokia’s existing cheap lineup and pave the way for higher-end Nokia phone series in the future. These developments coincide with the debut of the company’s new mobile virtual network operator (MVNO) in the United Kingdom.

A brief summary of each of the new phones can be seen below, although depending on the model you’re interested in, you may have to wait a bit longer. So far, only the Nokia G10 and G20 have been announced for the United States, with others confirmed for the United Kingdom. 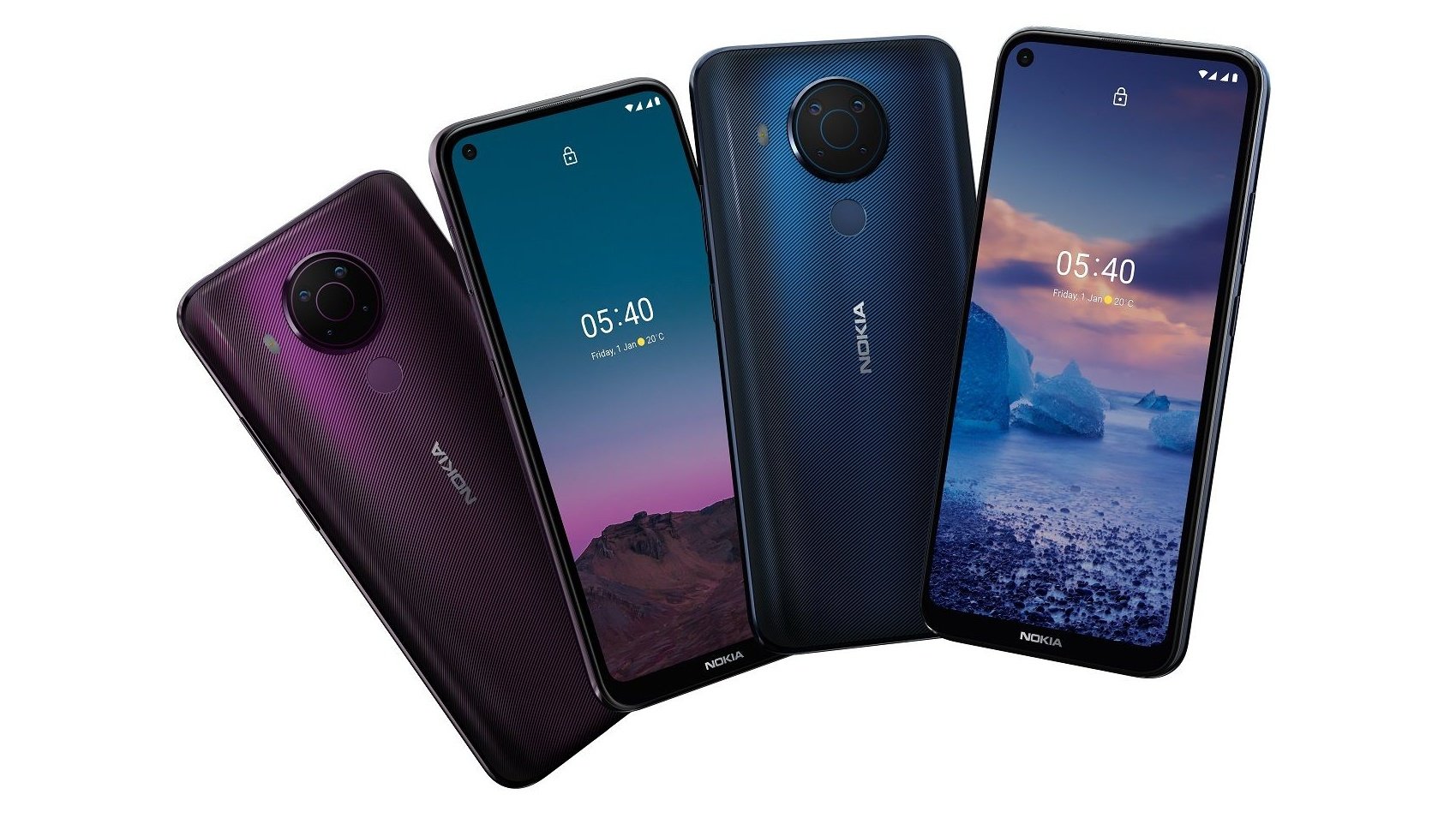 The Nokia G-Series is intended to be a step up from the Nokia C-Series, with more powerful chipsets and complete Android support. The G-Series is made up of two devices: the G10 and the G20. 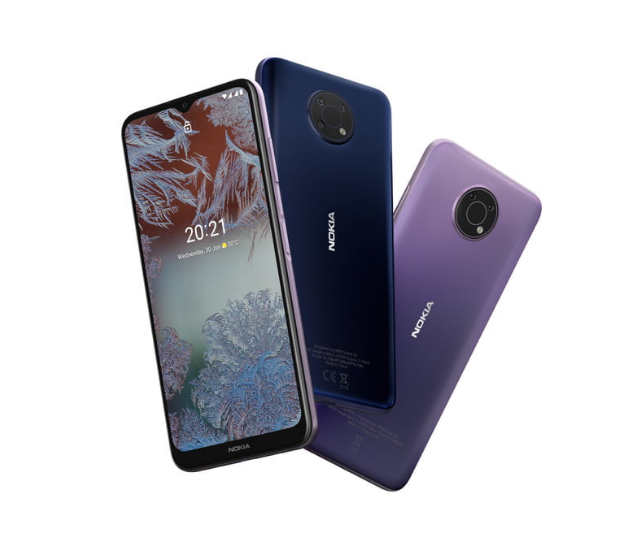 The Nokia G-Series uses MediaTek chipsets instead of the ultra-low-end Unisoc CPUs. The Nokia G10 is powered by a MediaTek G25 CPU, with 3GB or 4GB of RAM and 32GB or 64GB of storage options. That’s a significant improvement over the C-Series phones, and it should result in a smoother, quicker experience.

There are even additional premium features on the phone. The rear of the phone features a triple camera system with a 13-megapixel primary camera, a 2-megapixel macro camera, and a 2-megapixel depth camera. The gadget is powered by a large 5,050mAh battery that is charged via the USB-C connection on the bottom.

The phone also includes a dedicated Google Assistant button, which may be useful and a fingerprint sensor on the side.

The Nokia G10 has a similar appearance to Nokia’s C-Series phones, with a small notch on top for the front-facing camera, which is 8 megapixels. In addition, like the C-Series phones, it sports a 6.5-inch 720p display. 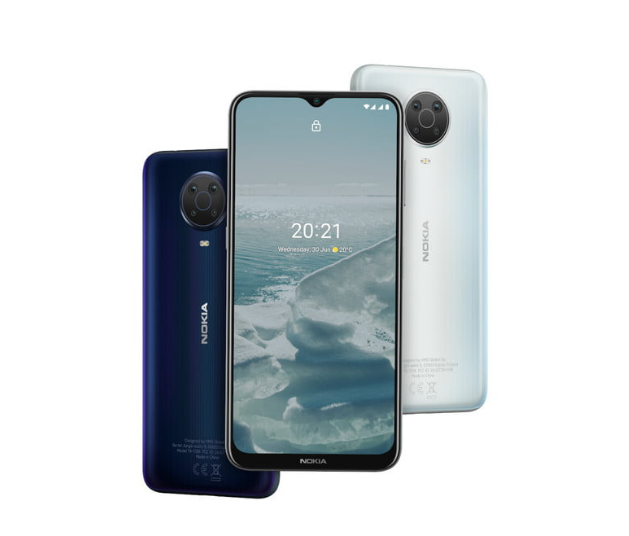 The Nokia G20 is next, which receives a little performance boost. The phone features a MediaTek G35 CPU, 4GB of RAM, and 64GB or 128GB of storage, which should be plenty for most users.

The camera on the back of the gadget becomes even more flexible. With a 48-megapixel primary camera, a 5-megapixel ultrawide camera, a 2-megapixel macro camera, and a 2-megapixel depth camera, the Nokia G20 has a quad-camera system.

Furthermore, the smartphone features the same amazing 5,050mAh battery and a 6.5-inch display with a 720p resolution. The Google Assistant button and a side-mounted fingerprint sensor are among the other features.

The Nokia G20 comes with Android 11 and comes with two years of upgrades. It was released in May in the United Kingdom for 130 pounds ($179).

The G20 will be released in the United States on June 28 for $199. It will be available in two colourways: Glacier and Night. 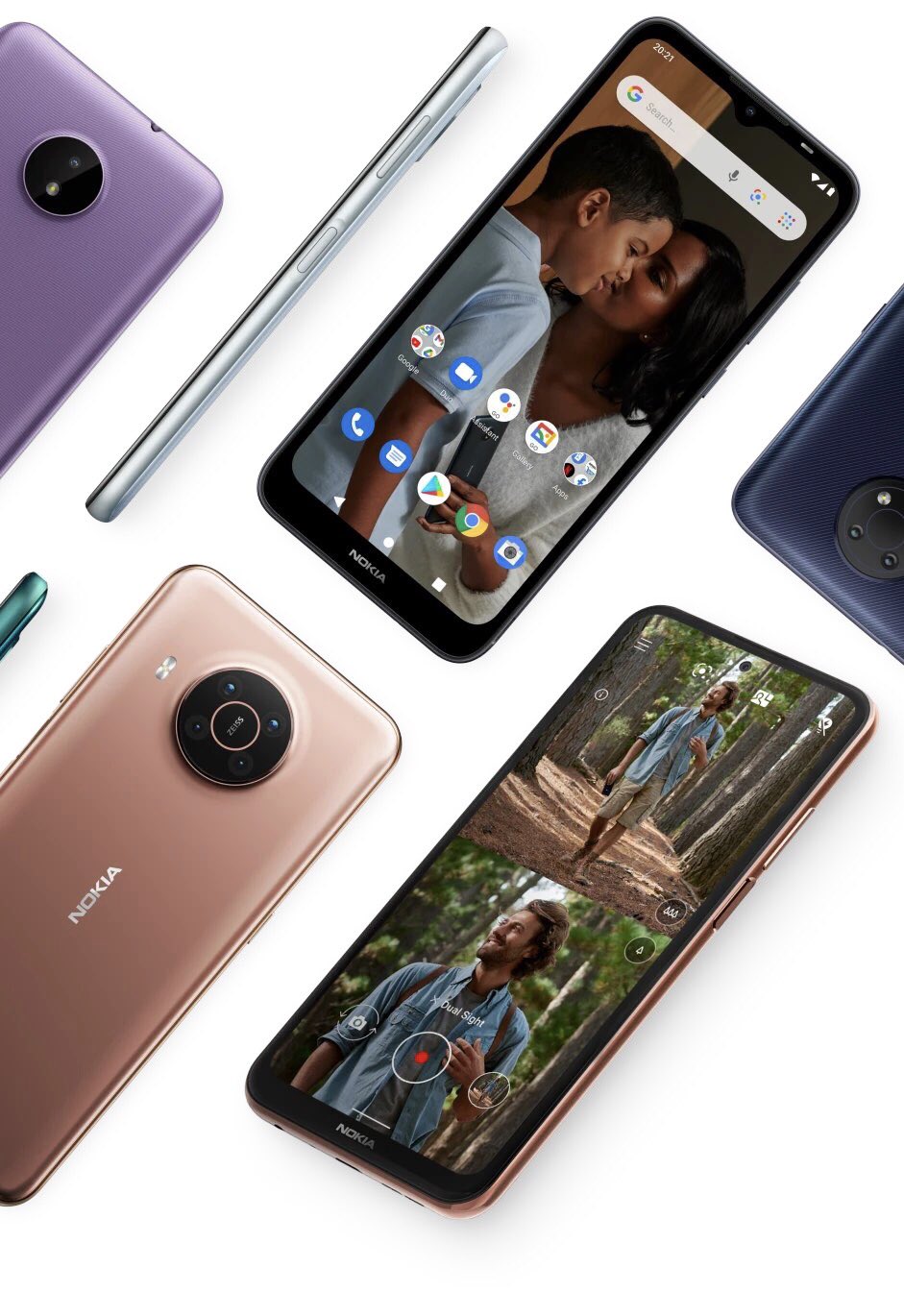 The Nokia C-Series is Nokia’s entry-level smartphone line, consisting of two models: the Nokia C10 and Nokia C20. Here’s a closer look at each of them. 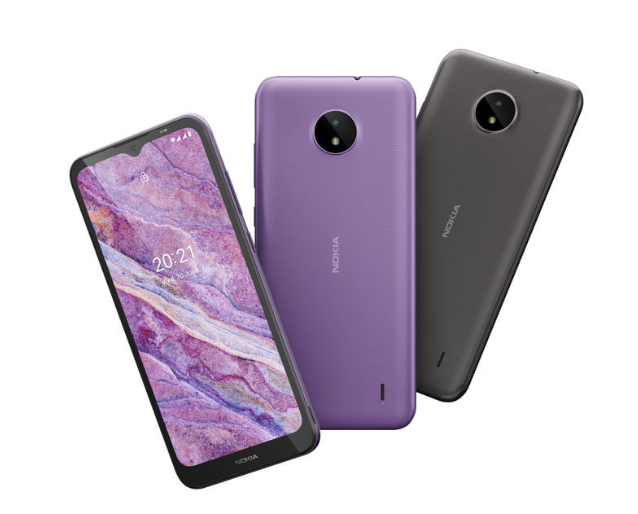 The Nokia C10 is the company’s most affordable smartphone, and it’s designed to provide a good experience to people looking to spend as little money as possible on a smartphone. The gadget features a Unisoc SC7331e processor and 1GB or 2GB of RAM, so don’t expect much more than basic functionality.

The storage options are 16GB or 32GB, which should be plenty for most users of this type of phone. Fortunately, there’s a MicroSD card slot for more storage.

The display on the front is 6.5 inches, has a 720p resolution, and a teardrop notch at the top. The rear-facing and front-facing cameras are both 5-megapixels, and although they will capture photographs, don’t expect them to be excellent. A 3,000mAh battery powers everything, and it’s charged through a MicroUSB connection on the bottom.

Nokia promises two years of updates for the phone, which runs on Android 11 Go. Although HMD Global has said that it will not be available in the United Kingdom, the phone’s release date is unknown. 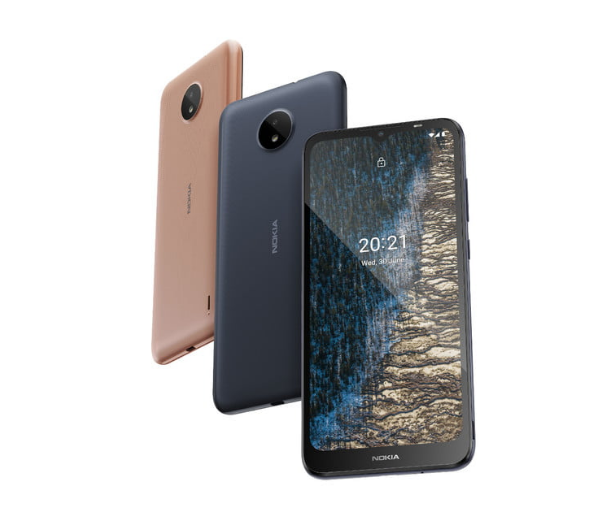 The Nokia C20 is a minor improvement over the C10, but I don’t anticipate a significant upgrade. The Unisoc SC9863a processor is paired with either 1GB or 2GB of RAM, giving the device a somewhat more powerful chipset. In addition, you’ll receive 16GB or 32GB of storage, as well as a MicroSD card slot for additional storage.

The phone’s battery, camera, and display are nearly identical to those of the C10. However, the C20’s camera does enable HDR shooting. The gadget also features a MicroUSB connector and a replaceable battery.

The C20, like the C10, comes with Android 11 Go and a two-year update guarantee. So far, we know it will be available in the United Kingdom on the Three networks in early June and will cost 79 British pounds ($108). 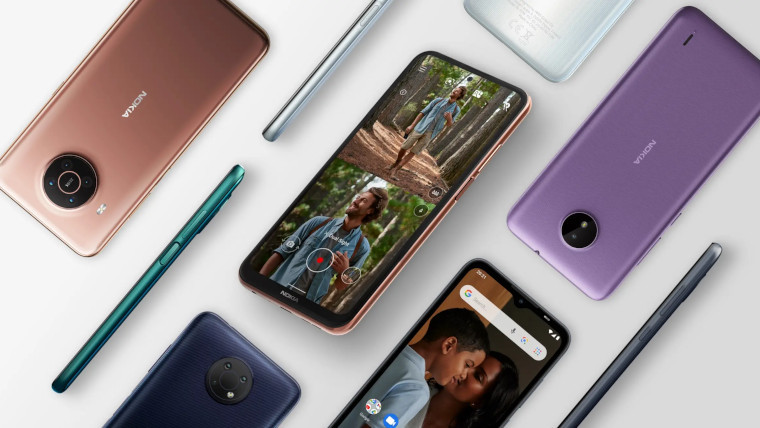 The Nokia X-Series is the highest-end of Nokia’s new phone series; nevertheless, while X-Series devices are better than other new Nokia phones, they are still budget smartphones. 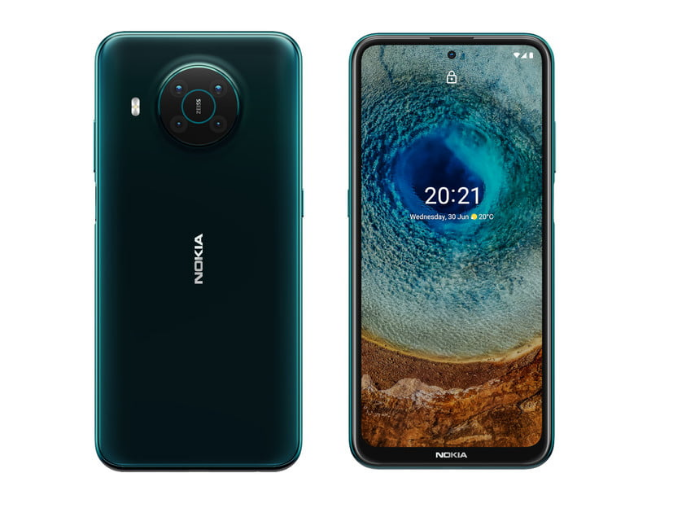 The Nokia X10 is one of two new phones using Qualcomm processors. The smartphone is equipped with Qualcomm’s latest Snapdragon 480 processor, which allows for a 5G connection. It’s a powerful combination with 4GB or 6GB of RAM and 128GB of storage. It’s safe to say that the Nokia X10 will outperform the lower-end Nokia smartphones.

The camera is also likely to be improved. Nokia’s X-Series collaboration with Zeiss is ongoing, and the Nokia X10’s Zeiss-branded camera is a quad camera. A 48-megapixel primary camera, a 5-megapixel ultrawide camera, a 2-megapixel depth camera, and a 2-megapixel macro camera are included in the package. In addition, there’s an 8-megapixel selfie camera on the front—a 4,470mAh battery powers everything.

The Nokia X10’s display is also superior. Instead of a notch, you’ll get a 6.67-inch display with 1,080p resolution and a hole-punch cutout for the front-facing camera. To put it another way, the Nokia X10 appears to be a touch more contemporary than the other new Nokia handsets.

The Nokia X10 retains the Google Assistant button and the fingerprint sensor on the side, and it comes preloaded with Android 11.

Nokia promises three years of updates for the X-Series. When the Nokia X10 with 6GB/128GB is launched in June in the United Kingdom, it will cost 250 pounds ($344). Only the Three networks will be able to get the 4GB/128GB variant. 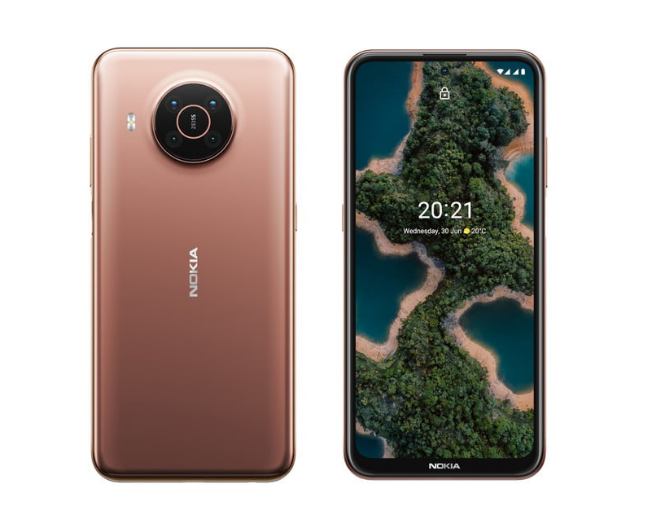 If purchased in Europe or the United Kingdom, HMD Global will extend the regular two-year warranty for a total of three years. It will be available in May, with the 6GB/128GB variant costing 300 pounds/$412 and the 8GB/128GB model costing 320 pounds/$440.