Recently a four legged robot, which was developed by the Boston Dynamics was in the news. ‘Spot’ the robot was used by the French Military in their military operations for two days. This was conducted in order to understand the difference robots will be able to bring in the military.

The company claimed that the robots are not meant for any harm but for assistance in one of its statements given out. Boston Dynamics robots are considered to be very advanced and are being developed to scale even on the difficult uneven terrain with ease. This makes it extremely easy for them to keep their balance stable even when pushed by an external force. 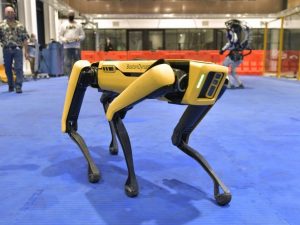 Recently a video was circulated on the social networking site, Twitter. The video shows a robot dog emerging out of the building and then going down the stairs. The bystanders were awestruck upon seeing the robot dog with the police. This robot was spotted at a Manhattan public housing complex.

Albert Fox Cahn, the founder of the advocacy group Surveillance Technology Oversight Project (STOP) said, “Right now it seems to be a fancy toy in search of an actual use case.” He further added that, “It’s really alarming to see them roll out these props from a bad Black Mirror episode without any real public safety justification.”

A spokesperson for the New York Police Department (NYPD) said that the robot dog which can be seen in the video was on standby and was not used. The situation was, on the Monday afternoon a domestic dispute took place at the East 28th Street. A man had allegedly barricaded himself, with a mother and a baby inside a room.

The police officers then arrived at the situation. They convinced the man to let the woman and her child go. The man was then arrested for possession of weapons. The New York Police Department (NYPD) said that they had utilized robots when a situation of bomb scares or hostage negotiations used to arise.

The police department further added and made it clear that the robot dog is being tested in order to evaluate its capabilities.

This has sparked a lot of interest and fear from the public. Inspector Frank Digiacomo who is currently working for the New York Police Department (NYPD) Technical Assistance Response Unit, while speaking to ABC7 News said, “This dog is going to save lives, protect people, and protect officers and that’s our goal.”

The New York Police Department (NYPD) since October, has been utilizing robots in order to deal with some of the crimes scenes and even the hostage situations. This has given rise to many issues and questions from the public about unwanted surveillance.

This robot is remote controlled and was manufactured by the Boston Dynamics. The name of this robot is ‘Spot’. This robot is capable of opening doors and is has enough strength in order to assist tow an 18 wheeler.

The mobile dog, has automated sensors fit into it. And is also equipped with lights and cameras which are capable of collecting ‘limitless data’. The robot dog is currently up for sale in the market at the price of $74,000.