Ohio State University wins trademark for the word ‘THE’

In the wake of a three-year-old struggle to pull legitimate identification access to a word that is very essential for the overall integrity of Ohio State University, it has authoritatively enrolled a label for the word “THE”. 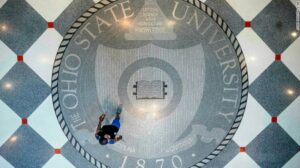 A representative of the institution said that accessing the trademark “THE” has been a long-standing motto of the Ohio State association and also of the supporters of Buckeye who buy various commodities associated with the University to assist in the student fellowship, information centers, and any other drives of the institution.

He also said that this appeal was registered with the US Patent and Trademark office almost three years ago following the registration of a similar appeal by fashion designer Marc Jacobs.

In 2021, both the fashion designer and the university came to a contract that permits each party to sign up “THE” branded commodities for stable use and authorization, he added further.

The representative Ben Johnson adding more to his statement said that just as any other association put in their efforts to safeguard the identity and initials of their University, Ohio State is also working for the same as these services will not only favor the students but also the faculty along with encouraging the core university aim of teaching and research.

Johnson also mentioned that the institution’s project of identification and authorization brings about an average of $12.5 million or more credit per year. This revenue contributes to the various programs and student fellowships of the university.

Ohio State University is one of the most popular college athletic forces as the institution continually hosts championship-level football teams and edges out basketball troops.

Back in 1986, the university used the word “THE” with its name for the first time. At that time the academy proposed a new label with the thoughts of getting sidetracked from its “OSU” label. This step was taken by the institution in order to have a different identity as two other academies had the same trademark.