An open source license may either expressly or implicitly include an affirmative grant of rights relating to patents, such as the right to use, modify, distribute and (under some open source licenses) sub-license software covered by the patent. Absent such a license, the developer, distributor or user would be infringing the patent owner’s intellectual property rights without permission, and could therefore be sued by the patent owner.

For example, a decade ago a number of the largest IT companies in the world, including IBM, Sun Microsystems, Oracle, and Nokia, among others, made public pledges not to assert specified patents they owned (over 500, in the case of IBM) against users of Linux (and in some cases other popular open source software as well, such as OpenOffice). The reason was to assure those users that they could acquire and use the named open source products without worrying about being sued for patent infringement by the companies making the pledges.

When a company makes its patents ‘open source’ it can be said that it stems from a desire to encourage the development of electric and hybrid vehicle technologies among car manufacturers. Let us take Tesla Motors as an example:

More than 200 U.S. patents have been assigned to Tesla Motors, and these patents represent a wide degree of innovation in the field of electric vehicle fuelling and energy storage. Some media outlets had already reported Musk meeting with executives from companies like BMW to discuss collaborative efforts in utilizing Tesla’s intellectual property. That discussion had centred around the use of Tesla’s Supercharger infrastructure. There were then about 98 Supercharger stations strewn across the United States by Tesla. These stations then only catered to Tesla Model S vehicles. Elon Musk had made many shrewd business decisions to amass a multi-billion dollar personal net worth. At first glance, the decision to let others infringe on patented technologies made little sense from a business standpoint, and had led to the demise of some businesses in the past. However, if Musk didn’t think that he could convince major car manufacturers to license Tesla’s patented technologies, there were other ways that he benefitted financially from the decision to make his patents ‘open source.’ 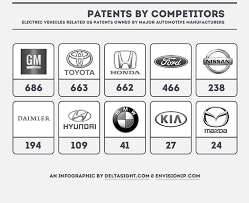 Musk may have doubted the ability of Tesla to build enough cars to address issues posed by fossil fuel use, but he surely could not doubt Tesla’s ability to manufacture enough lithium ion batteries to power that many vehicles. Indeed, the Gigafactory being developed by Tesla Motors was designed to support the development of mass-produced electric vehicles by driving down manufacturing costs for lithium ion batteries by 30 percent. Tesla Motors had announced that they expected the Gigafactory to be fully operational by 2020. But again, the timing of the patent announcement in the wake of Toyota phasing out Tesla and unveiling its own hydrogen car made one wonder whether the patent altruism had more to do with an attempt to stave off other technologies so that the Tesla battery technology would be used royalty free. With Tesla making the batteries, if other car companies used the Tesla technology and purchased the batteries from Tesla that could have resulted in a lot of money.

Although electric vehicles are the most recognizable product of Tesla Motors business activities, both the Gigafactory and the Supercharger network represented significant ways that Tesla could capitalize on the decision to let others copy its technologies. The Gigafactory would certainly produce more batteries than could be sold in Tesla vehicles, but the company could simply sell those batteries to Ford, GM or other carmakers who wanted to incorporate lithium ion batteries into their vehicles. Those vehicles would then be charged at Tesla Supercharger stations, improving the return on Elon Musk’s open source investment.

“Tesla could generate upwards of $1.8B in operating profit annually from the resale of its batteries. Tesla could offer their supercharger networks to Chevy and Ford vehicles, charging them for around $15, which was also a value proposition compared to gasoline vehicles… If Tesla were, by 2020, to sell 100,000 cars, 400,000 battery packs for other car makers, and operate 500 superchargers (to mostly non-Tesla electric vehicles), the company could generate nearly $5.5B in operating profit.” 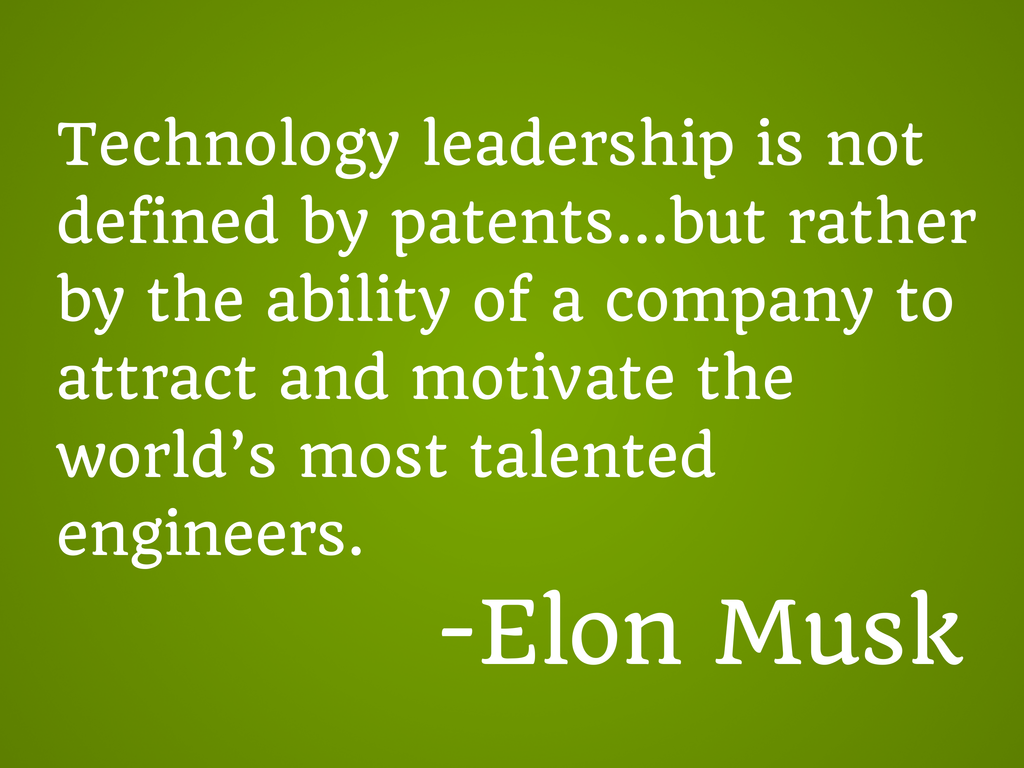 Within five days of Elon Musk’s blog post announcing Tesla’s open source philosophy, the company’s stock price improved by almost $30 per share. There’s little doubt that Musk’s announcement had contributed to an increase in Tesla’s short-term value, or at least didn’t hinder stock value. As well, Musk had then positioned himself as the open source provider of electric vehicle technologies, at least for the American market.

By making patents “open”, companies could jump-start growth in the vehicle industry.  It also will make it easier for companies to build partnerships and alliances with other companies.  Tesla, for example, had talked with BMW about partnering to build recharging stations and infrastructure. Open source patents would help the world benefit from a common, rapidly-evolving technology platform. Open source philosophy to patents will strengthen rather than diminish a company’s position. By opening its patents, a company rightly realises it’s better to be the best product in a large industry than the only product in a niche one.

When Netscape released its Web browser’s source code to the public in 1998, it seemed like a Hail Mary move for a company embattled by Microsoft. Now barely a week goes by without a commercial tech company announcing the launch of a new platform, app or extension—and its source code. Among them is Microsoft, a company whose then-CEO, Steve Ballmer, called the open-source Linux operating system a “cancer” in 2001. In the last few years we’ve seen Apple release the code behind the Swift programming language; Google, TensorFlow, a machine-learning framework; Microsoft, a JavaScript engine; and Facebook, a plethora of open-source projects including React Native and Relay. 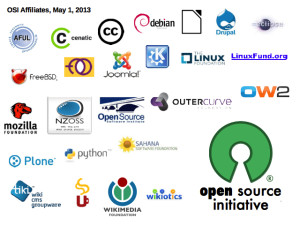 Software companies who have made their source code ‘open’ (Image Credits: Taivara)

The emergence of companies like Facebook, Airbnb, and Square, whose businesses lie outside the world of commercial software, as players in open source is particularly interesting. While they may follow the principles that underpin traditional open source software like Linux, the reasons for their openness are not simply altruism and the greater good.

Releasing open source boosts a company’s image as innovators, helping them recruit engineers. It also helps create de facto standards, as startups adopt their way of writing code. And in some cases, it may accelerate the development of entire industries. In 2014, Tesla Motors, the electric-car maker, gave away its entire patent portfolio, providing those using it promised not to engage in courtroom battles over intellectual property. While General Motors rebuffed Tesla’s offer, the potential consequences of this are an increase in electric-car innovation across the automotive industry, meaning more electric cars, more infrastructure for them, and more consumers interested in buying them—including from Tesla.

Google’s TensorFlow, an open-­source platform for machine learning, was originally developed by researchers and engineers working on the Google Brain team conducting machine learning and deep neural-networks research. The core is written in C++, but it has a Python front end. By involving open-source enthusiasts, Google believes it will bring artificial intelligence closer to reality. Outsiders may expand the tool to other languages, including Go, Java, and perhaps even JavaScript, so that coders have more ways of building AI-driven apps. One’s open-source contributions instantly explain one’s interests, serving as a calling card. Want to find a collaborator to work on a project? Just chat up someone who’s building up the same codebase as you. For Alvaro Videla, contributing to RabbitMQ, an application messaging broker, led to writing a book and getting invited to speak at conferences.

Open source isn’t an unalloyed good. There are downsides for both coders and companies who participate in projects. But it’s clear that the powerful driving forces that have placed open source at the center of software innovation and automotive sector will continue throughout this decade at least—and for years to come. With a company opening up its patents, it encourages both existing and new ventures to invest in the new innovation. With the advent of technologies like 3D printing slowly taking the place of assembly-line production and open networks of information giving access to ideas and designs that were once protected as industry trade secrets, the balance of power is shifting from the incumbents to the disruptors.

The real winners in this are consumers, who can leverage the power of information to build, maintain, and modify accessible and working vehicles as they see fit. Opening up the designs of tomorrow’s vehicles may lead to a new class of auto mechanic in an industry that has already seen huge results of change in vehicle structure and design. This may shift balances of power there too, as experts with access to tools could build vehicles from scratch more easily than ever. Yet with all the change that is happening with open source vehicles today, it may be years before we see the long-term effects on the market. As it stands, closed-source, gas powered vehicles are the norm, and even if open-source vehicles continue to grow in use, there will be two paradigms of vehicle design for the foreseeable future. Much like the early days of computers and their operating systems, the permanent effect on the market overall is largely yet to be seen. But the reality of open source vehicles has opened a window into the possible future of the automobile industry, and it looks undeniably bright.

In Conversation With Ganesh Sonawane On Using Technology To Create Independence ![/box]