Oracle Red Bull Racing and Bybit sign sponsorship deal. They have reached an agreement that will set a new sponsorship record. The three-year deal is the most recent high-profile partnership between a Formula One team and a cryptocurrency company. 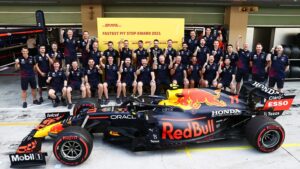 Bybit will become a ‘Principal Team Partner’ and the official ‘Cryptocurrency Exchange Partner’ at Oracle Red Bull as part of the multi-year agreement, which also includes a number of joint projects aimed at increasing fan involvement.

Oracle Red Bull and Bybit will launch programs that will provide racing fans with “fan tokens” and other digital assets like NFTs, as well as efforts that will promote “Tech incubators,” STEM jobs, and coding skills to new audiences.

The partnership fee will be paid in a combination of cash and BIT, BitDAO’s native governance token, as part of the world-record-breaking arrangement, which is thought to be worth upwards of £100 million.

The Bybit logo will be displayed on the front wing of the Red Bull team car as part of the arrangement.

“It’s natural that Bybit sits at the cutting edge of technology as we approach a new age of F1 competition in 2022, with a sophisticated and potentially game-changing new philosophy of cars heading to the track.”

Oracle The latest in a long line of relationships between Formula One teams and cryptocurrency exchanges is Red Bull’s move into the crypto market.

Last year, FTX struck a long-term sponsorship arrangement with Lewis Hamilton and Mercedes in which the FTX brand was imprinted on both the vehicles and the drivers, while Binance entered the fray with a fan-token partnership with Team Alpine in which the Binance logo will be shown on the new ‘Alpine A522’ car.

Interaction with other people Crypto.com also teamed with Aston Martin Cognizant, an F1 team, to offer a series of NFTs devoted to the team’s comeback to the track.

Bybit will be in charge of distributing digital assets associated with the team, such as NFTs, as a fan token issuance partner. It will also assist in the team’s education and improvement of their “crypto-literacy.”

Ben Zhou, CEO, and co-founder of Bybit, said: “In the same manner that digital assets have revolutionized the global financial system, the team has changed the game.”

The Singaporean exchange also serves as the primary global sponsor of Argentina’s national soccer team, has signed a two-year sponsorship agreement with the Argentina Football Association in 2021.

Also read: Everything You Need to Know About The Pawtocol Token