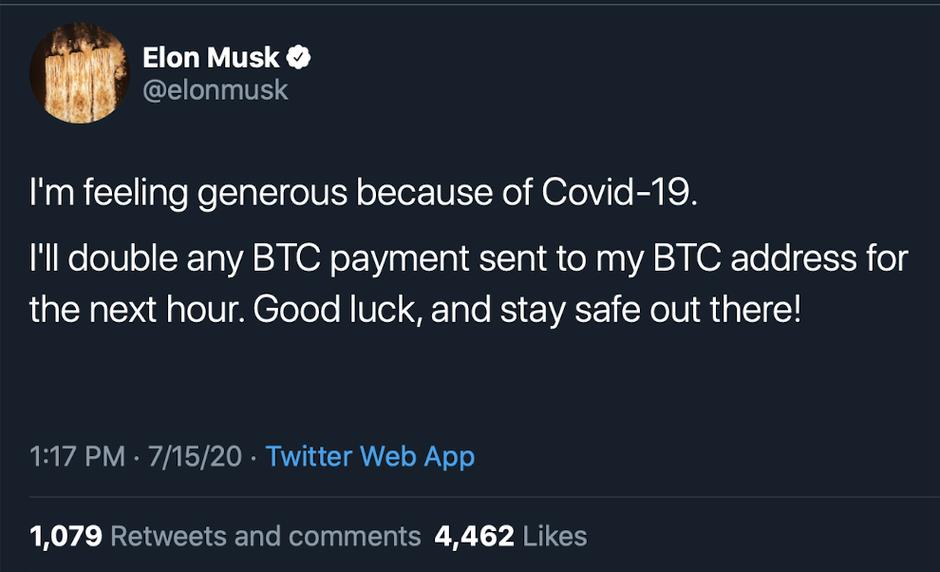 Official account of Elon Musk hacked to promote the scam of Bitcoins in July, 2020

Investors and buyers of the crypto currencies lose over $2 billion over the course of last 6 months, to scammers who impersonated The Chief Executive Officer of Tesla, the automatic electric car company and SpaceX- Elon Musk who is a firm believer of the crypto currency and encourages people to get it a lot. The Federal Trade Commission reported on Monday.

Making the public aware of the scams, the Federal Trade Commission, in its statement said- “Promises of guaranteed huge returns or claims that your cryptocurrency will be multiplied are always scams.”

This has been going on for several years now. These scammers pose as Elon Musk in order to fraud the people on social Media and scam them to steal their crypto currencies. They use deceptive tactics and schemes which are misleading and fake on sites and social media websites like Twitter. The scammers dupe the account of Elon Musk by slightly changing the user name but keeping the bio and profile photo and everything else same. The scammers pretend to be Elon Musk and ask the victims for their account info or ask them to transfer the currencies to a specific account in exchange of which, the victim was promised to get a double the amount of payment. The scams have violated the policy of Twitter against deceptive accounts. However, the moderators are struggling to restrict the activities of the scammers, and it continues to remains prevalent on the platform.

This figure of $2 Million was just recently revealed in a larger report on crypto currencies, which was published by the FTC on Monday, May 17. This is not it. From the month of October, last year, the users have reported losing over a total of $80 Millions in such scams, increasing “more than ten-fold year-over-year,” the commission said. On average, the users and investors lose about $1,900 in scams like these.

The risk of the scams have increased so much that Musk himself was a victim of such scam during the last summer. In the list of recent breaches in the history of Twitter, the accounts belonging to Elon Musk, President Barak Obama, President Joe Biden, Bill Gates and even the official twitter handle of Apple was attacked and compromised to promote a Bitcoin Scam.

The scammers received nearly an amount of $120,000 from these attacks and scams. These scams forced Twitter to block all the verified users, even with the blue tick to post any tweet for the several few next hours.