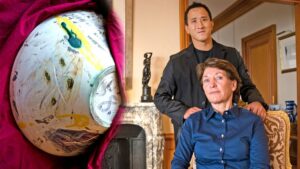 Marina Picasso and her son Florian Picasso, Picasso’s granddaughter, opened up their upscale Geneva flat — which is brimming with pieces by their illustrious grandpa — for an exclusive interview before the official premiere this week.

They gave a glimpse of the work behind what they’re billing as an unparalleled marriage of old-school fine art with digital media, albeit a tantalizingly little one. They’re hoping to profit from and ride a wave of interest in non-fungible tokens, or NFTs, which have made millions for lesser-known musicians while also being criticized as environmentally costly get-rich schemes by some.

According to his family’s advocates, a Picasso would usher in a Grand Master into the game. A fungible token is an asset that may be swapped one for one in economic terms. Consider dollars or Bitcoins: they both have the same value and may be freely traded. A non-fungible object, such as an ancient house or a classic car, has its own distinct worth. As of 5:30 p.m. IST on January 27, the price of bitcoin in India was Rs. 29.79 lakh.

NFTs are created by combining this concept with cryptocurrency technology known as the blockchain. They’re essentially digital certificates of authenticity that may be applied to digital art or just about anything else that’s digital.

“We’re trying to develop a bridge between the NFT world and the fine art world,” Picasso’s great-grandson Florian Picasso remarked. The artist’s descendants are keeping their cards close to their chests in order to generate interest and protect a family heirloom for the time being.

Only a slice of the underside of the sculpture associated with the NFTs, a ceramic item the size of a large salad bowl, is being seen. Forms such as a thick yellow line, a dripping green blotch, and a brushed-on number “58” at the base can be seen on the exposed areas.

Marina Picasso claims the prized pottery piece was made while she was a toddler in October 1958. “It’s a work that depicts a face and is quite emotive,” she explained. “It’s wonderful, joyful.” It is a representation of life… It’s one of those things that’s been a part of our lives, our private lives – my life with my kids.”

The Associated Press reported that Sotheby’s will hold an auction in March that will contain a unique NFT as well as the actual porcelain bowl, according to Cyril Noterman, a longtime manager for Florian Picasso, and Kathryn Frazier, a publicist for the project.

“Sotheby’s has clarified that it will not be selling an NFT of a work by Pablo Picasso,” a spokesman for the auction house told the Associated Press on Wednesday. A first-phase online auction of over 1,000 other NFTs will begin on Friday, according to Noterman and Frazier, using the Nifty Gateway and Origin Protocol platforms.

They chose the multicolored ceramic artwork because it was “a fun one” to begin with, according to Florian Picasso. An NFT Picasso carries virtually epochal symbolism, similar to when the Beatles’ whole catalog was ultimately made available on iTunes. The goal, according to the family and its business managers, is to foster a younger generation of Picasso admirers.

“Everything is changing,” Florian Picasso said, emphasizing the importance of the NFT honoring the great artist.

“I believe it is in keeping with Picasso’s legacy since we are paying honor to him and his method of working, which was always inventive,” he explained.

How charming it must have seemed back in the day when Picasso would just draw on a napkin as payment for a restaurant supper, his work apparently worth considerably more than the cost of the food and drinks he had consumed.

If you find this article informative then don’t share it with your friends and family!

Also read: Paris Hilton has invested in crypto since 2016