Passenger’s Phone Catches Fire During Indigo Flight Luckily, no one was injured

During the flight from Dibrugarh to New Delhi, a passenger’s smart phone caught fire in the air. The flight was of an Indigo airline, and the freak incident took place on Thursday, the 14th of April.

The Indigo flight no 6E 2037 was taking one of its regular and common routes from Dibrugarh, an essential and industrial city in the North Eastern state of Assam to the capital city of India, New Delhi when one of the flight’s alert crew members could see sparks flying out of the phone and some smoke being expelled from it too according to official sources.

The flight, however, resumed with its journey and regular operations and continued their travel towards Delhi. The flight landed at a slight delay at 12:45 PM, on Thursday, the 14th of April. 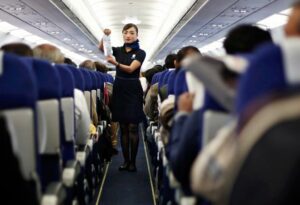 IndiGo published a public statement after this occurrence by announcing and confirming that a smart phone did light up with sparks and did let out some smoke but the diligent and fast working crew members were able to successfully, take the emergency fire extinguisher, douse the blaze, calm everyone on the flight down and continue their regular in flight operations.

The public statement also said none of the crew nor passengers received any harm from the sparks, smokes or the emergency fire extinguisher. They also said that all crew members, including pilots and flight attendants that are hired by IndiGo go through rigorous training to handle all kinds of emergency during air travel and that the training was paid off in an effective manner.

We are lucky that this fire was small, localised and also identified swiftly by someone in the flight. But this is not the first-time aviation and fires have met this year. On January 10th, 2022, as a vehicle carrying goods from the airport to the flight caught fire out of nowhere. This incident also took place for everyone to see during the day at around 1pm.

The fire crew team entered the scene swiftly and tamed the fire quickly minimizing the potential large damage. These kinds of situations are detrimental to the safety and the important position and role that India has in world politics.