Paytm Messaged Zomato User And This Is What The CEOs Had To Say About Customer Acquisition On Twitter ! 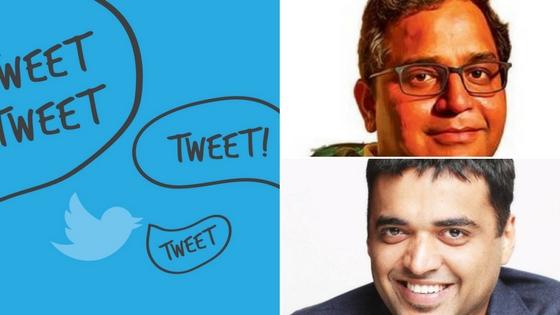 Customer acquisition tactics has seen some major changes in the recent era, the depth of personalization has gone so deep and all thanks goes to technology. Last night, one of Zomato users who paid via net banking was shocked to receive a SMS from PayTM.

I ordered food from @zomato and paid via net banking. Now I get this text from @Paytm. Is Zomato trading my order details with Paytm? WTF. pic.twitter.com/BtDzpXvg4x

He immediately roped in both Vijay Shekhar Sharma and Deepinder Goyal to explain the situation as PayTM message exactly specified what he ordered to check if Zomato was trading his orders to PayTM. There were other users who jumped into the conversation.

It was clear that the user was not using PayTM at that point of time and his data reaching the company was clearly a privacy breach for him.

@shubHASHISH @shakeyiyer @akm1410 @deepigoyal who said that ??? Why will we buy any outside data????

And that’s when Deepinder Goyal jumped into the conversation.

@vijayshekhar @shubHASHISH @shakeyiyer @akm1410 sir. If someone is ready to sell their soul, doesn’t mean that should buy it.

@vijayshekhar @shubHASHISH @shakeyiyer @akm1410 this is poor user experience, our users are getting confused about payment options.

@vijayshekhar @shubHASHISH @shakeyiyer @akm1410 Look up to you as a role model. Please remain one :-). Growth at all costs is not good.

@vijayshekhar @shubHASHISH @shakeyiyer @akm1410 so you will stoop to someone else’s level? That’s what this has come down to now? ??????

@deepigoyal I just spoke with the restaurant. They say don’t accept cards, have no POS machine. Pay only via Zomato. @vijayshekhar @akm1410

@shubHASHISH @deepigoyal @vijayshekhar ah. This clears things. Restaurant is not sending you that PayTM SMS then

@shubHASHISH @deepigoyal @vijayshekhar also clearly this is a private transaction between You, Zomato and restaurant. How does PayTM enter?

@shubHASHISH @akm1410 @vijayshekhar they don’t have access to anything which doesn’t go through them.

@apurv289 @vijayshekhar @shubHASHISH @shakeyiyer @akm1410 I have a hunch it is the pos company behind this.

@shubHASHISH @vijayshekhar @akm1410 We don’t even trigger that for a user. It’s the users choice. Btw, we have zero COD right now.

@apurv289 @vijayshekhar @akm1410 @shubHASHISH shouldn’t it be the other way around. Select to send SMS?

@akm1410 @shubHASHISH I rest my case. On a separate note, we should be concerned. Our country’s future leaders are no better.

After clearing Zomato’s name and resting his case, Deepinder Goyal left the conversation but the other users were still trying to detect the privacy breach.

The conversation did not end last night, some users jumped in even today morning to understand the matter.

@shubHASHISH so basically 2 things 1. Petpooja sells customer data & hs provisioning for that in their software 2. Paytm buys that data.

In the age of digital marketing and targeted advertising, this is not new. Personalization adds more meaning and gives more opening to long term relationship, but  sometimes the level of personalization goes from customer acquisition to customer aversion. As Deepinder noted “we should be concerned”, is growth at all costs good for the company and the user?