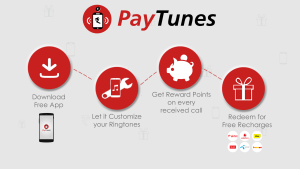 June 10, 2016: PayTunes, Delhi-based mobile ad platform has raised close to $500K in its Pre Series A round of funding led by CIO Angel Network and Indian Angel Network (IAN). Vishal Khare and Rajeev Arora have led this round of investment on behalf of IAN and will join the company board to mentor the team. Apurva Parekh (from Pidilite) and Sanjay Mehta have also invested in this round. Before this, in September last year, the startup had raised $100K from CIO Angel Network.

PayTunes provides advertisers and brands a targeted medium to reach mobile consumers through audio visual ads and was founded by two IIT Delhi batchmates—Divya Pratap Singh, Rakesh Sehgal—and Gaurav Tiwari in July last year.  Their team was recently joined by Amit Naredi, who was working at My FM, as a co-founder and chief sales officer.

For users, the PayTunes app replaces their mobile ringtones with ad jingles from advertisers and at the end of the call, a visual for the same ad is also shown. For every ad played, a user earns points which can be redeemed against mobile recharges and bill payments. PayTunes also provides offers to its users from e-commerce portals.

For advertisers, PayTunes provides a complete ad platform with in-build ad analytics. Advertisers can selectively choose the users they want to target based on geography, demography and other parameters and push their ad from through a single click.

Commenting on the investment, Vishal Khare said, “Currently most of the branding spend  goes in traditional media such as TV, Radio and Print. Paytunes is building an alternate medium in the branding domain, which still manages the biggest chunk of advertising spend. While most of the consumption is offline, all these mediums are trying to move to mobile to improve user engagement. It presents a great opportunity for brands to reach mobile consumers extensively with the traditional audio-visual ad in its very own digital way.”

The company plans to utilise the investment for expanding the team and hiring more talent in the sales and marketing teams. The startup also plans to integrate an ‘ads on caller-tune’ feature, which will possibly increase the platform’s reach multiple times and make it more lucrative for advertisers.

PayTunes has a strong foothold in Delhi/NCR, UP, Gujarat, Mumbai-Pune, Rajasthan and Bihar regions. Its Android app is claimed to have been downloaded more than 4 lakh times till now.

Talking about their proposition, founder Divya Pratap Singh says, “Conventional mediums like TV and Radio lack control in terms of targeting campaigns to their target users and exposure of the ad. We are giving an entirely different and fresh method of mobile advertising, other than static banner ads, which are already in practice. We use the traditional audio ad which is broadcasted to a user on mobile on the incoming call which is then combined with graphic ad to complete the audio-visual effect on the user. This makes PayTunes the only mass medium apart from YouTube with a reach of more than 2 Mn users daily through our audio-visual offering on mobile.”