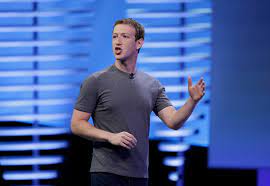 Thiel joined Zuckerberg, Jared Kushner, Donald Trump, and their spouses for a closed-door conversation in October 2019 while on a trip to address congressional concerns about a cryptocurrency that would work within the Facebook platform, according to Chafkin.

According to portions from Thiel’s book published Monday by New York Magazine, Thiel revealed the Trump administration’s arrangement with Zuckerberg to a confidante, who was then interviewed by Chafkin.

In his upcoming book, ‘The Contrarian: Peter Thiel and Silicon Valley’s Pursuit of Power,’ Max Chafkin, the features editor for Bloomberg’s Businessweek, writes that Zuckerberg ‘promised that Facebook would avoid fact-checking political speech – thus allowing the Trump campaign to claim whatever it wanted.’

According to Chafkin, the Facebook pioneer has denied any arrangement with the Trump administration, calling the notion “pretty ridiculous.”

Similarly, a representative from Facebook’s Executive Communications department flatly disputed the existence of such an arrangement, telling MailOnline.com on Monday that “the timeline suggested in the book excerpt conflicts with what’s already widely reported.”

In September 2019, Facebook Vice President of Global Affairs Sir Nick Clegg declared that the company will not fact-check statements made by politicians on the website. According to the Washington Post, the policy was introduced in September of 2018 before the congressional midterm election, despite Clegg’s formal announcement before the 2020 election.

Earlier this month, Trump, who is barred from using Facebook, told FOX presenter Greg Gutfeld that Zuckerberg ‘used to come to the White House to kiss [his] a**.’

Trump is now involved in class-action lawsuits against Google, YouTube, Twitter, and Facebook, saying that the companies are suppressing his and other conservatives’ views. During his appearance on the Greg Gutfeld Show, he urged “anyone who wants to join” to become a plaintiff.

In a statement released in June, Trump slipped another swipe at Zuckerberg into a statement applauding Nigeria on banning Twitter, ostensibly in retribution for the platform’s deletion of Nigerian President Muhammadu Buhari’s tweet.