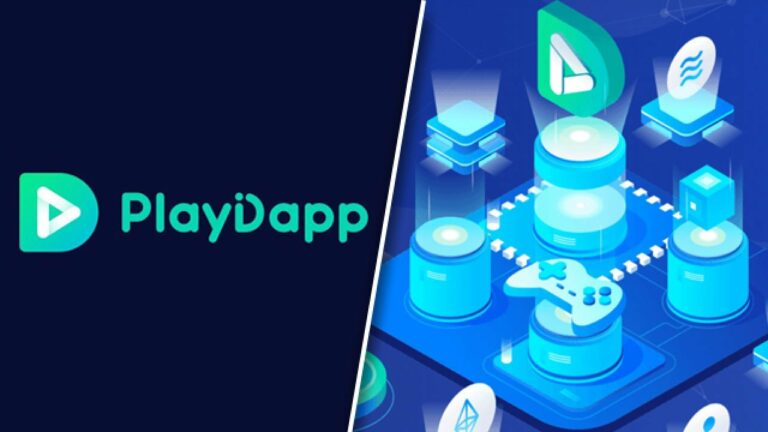 PlayDapp: Everything you need to know

We have been around in a world of constantly changing technologies for a long time now and yet again, we have the newest addition in the virtual world, the cryptocurrency industry. Crypto has been around for quite some time now but, has just recently started to make a name for itself in the global marketplace and has been more than successful in luring in potential investors from all across the globe.

Having said that, I sincerely believe, most of you are already aware of the basics of the said industry but if for some reason that’s still not the case, let me help you with that first.

To begin with, the crypto industry is nothing but simply a blockchain-based platform that is said to be decentralized to its very core. Being decentralized, the industry is more than capable of stepping outside the overall control and supervision of central authorities and can work freely without any unnecessary government interference as well.

On the other hand, this virtual asset of yours can also be made use of for a variety of purposes including the purchase and sale of goods and services as well as for the purpose of trade and exchange over cryptocurrency exchanges online. Though some of you might be aware of what the industry was like when it all first started but, for some others who recently have started taking interest in it, I think it is probably best for you to have a brief idea about the same.

When the industry was first introduced globally, unlike what we see around today, there were not many currencies available for investors to choose from and honestly, there were very few of them even interested to be a part of it. Naturally so, as back then, people were very skeptical about the return they could expect on their investments and the safety of their money as well.

As mentioned, that is not the case anymore as today, there is an entire pool of currencies for you to pick from, with newer ones coming in with each passing day and tons of new investors joining in every hour.

Now that we have established as to how big a success the crypto industry is, some of the biggest contributing factors for this extraordinary success include the convenience it offers, ease of use, its intuitive nature, high-profit margins as well as its uncertainty and volatility of course.

Speaking of being volatile, note that, the price fluctuations in the crypto marketplace are almost immediate, thus leaving no time to plan your actions and so, it is important to keep in mind that, if the industry is providing you with an opportunity to earn huge profits, if not done right, you could also end up having significant losses as well.

Now that you have a brief backstory about the crypto world, you will be able to have a much better understanding of what we have with us today, PlayDapp. To know more, I suggest you read further!

Everything to know about PlayDapp (PLA)

PlayDapp or as commonly referred to as PLA is nothing but simply a digital asset that is said to be used within the PlayDapp Blockchain gaming ecosystem in order to purchase as well as trade NFT (non-fungible token) items within the game itself and with the global C2C marketplace known as ’playdapp.com’.

Before moving on any further, it is probably worth noting that, PLA is the native utility token of the platform, which is said to power PlayDapp. Not just that, this Ethereum token can be used for a variety of purposes on the platform itself and is known to act as the primary token for processing transactions on PlayDapp. Also, game developers can receive PLA whenever a user makes any in-game purchases as well.

As per the platform’s website, PlayDapp is said to bring non-crypto game users onto blockchain gaming with the help of the PlayDapp service platform and in order to do so, the platform is said to provide PG solutions to play games without any cryptocurrencies.

As a result, PlayDapp will be providing various blockchain networks and game dApps (decentralized applications) to allow more and more users to play games on the PlayDapp service platforms in order to become crypto game users eventually.

Furthermore, cryptocurrencies and their underlying technology have allowed for a rise of a completely new trend with the potential to possibly disrupt a billion-dollar industry. Supported by the commonly known model of Play-To-Earn, on-chain gaming has gained global adoption and seems poise to onboard billions of users in the next couple of years.

On a similar note, it is worth noting that, leading customer to customer (C2C) non-fungible token marketplace PlayDapp has launched Along with the Gods: knights of the Dawn about two years ago, back in 2020, their first-ever blockchain-based role-playing game or as commonly referred to as in the industry, RPG.

Not just that, within its world, players are said to collect and raise heroes, each having different characteristics and gain rewards in the form of tokens, NFTs as well as runes, that too with real-world value. Speaking of RPGs, they have certainly gained quite some popularity due to their deep lore, its many challenges, the possibility for players to form a team of heroes having unique skill sets as well as for the reason that, the players can easily trade their items on the polygon network.

Also, the game is said to allow players to double their overall earnings within game rewards if they participate in events of course. In addition to this, PlayDapp has managed to secure its partnership with some of the biggest names in the industry including Chainlink, Samsung, Polygon, LINE, Portis as well as Klayth to name just a few of course.

Thus, the platform has been able to benefit from deep insights into the gaming industry as well as the core team’s personal experience as well. Other than this, on August 31st, PlayDapp also announced its NFT merge function which will allow users on the platform to upgrade their PlayDapp non-fungible tokens and increase their overall value by boosting their rarity rank.

Moving further, PlayDapp is one such platform that has adopted the Layer 2 solution Polygon Network (MATIC) in order to expand their marketplace for non-fungible tokens (NFTs) and stabilize services and has been able to gain the trust of users by simply resolving the risk involved with the Ethereum gas price surge.

Not to mention, the platform has successfully been listed on the world’s largest cryptocurrency exchange, Binance as well as one of the most popular names in the industry, Coinbase, which I believe will definitely help the cause.

Now that we have talked much about PlayDapp, some of you must be wondering, whether or not it is a good idea to invest in the platform? If that’s the case, then let’s find out, shall we?

As of today, the price of PlayDapp is about 1.20 US dollars with a twenty-four-hour trading volume of 133,776,202  dollars. Not just that, in just the past twenty-four hours, the value of PlayDapp has gone down by 5.83 percent, and with the current market cap of 362,397,053 US dollars, PLA is currently placed at #245 position as per the CoinMarketCap rankings.

Also, it is worth mentioning that, the current circulating supply of PlayDapp is 302,211,852 PLA coins, with a maximum lifetime supply of about 700,000,000 PLA coins. In just the past week alone, the price of the platform has fallen by 15.62 percent.

Reading so far, you must have gotten a fair understanding of the platform and by now, you should be able to figure out on your own whether or not investing in PlayDapp is the right thing for you to do. Seeing what it has to offer when combined with its performance in the recent past as well as its plans for the near future, I certainly believe that PlayDapp can prove to be a profitable investment in the near future, which is likely to provide you with higher returns and it is a possibility that your current investment may increase in value. But again, nothing can be said or sure!

If still not convinced, see it this way that, if say you buy PlayDapp worth a hundred dollars today, you will receive nearly 80.635 PLA. According to the analysis done by experts on the field, after five years of your investment, the return is expected to be about +701.21 percent and thus, your current hundred-dollar investment will be nearly 801.21 US dollars in 2026.

As mentioned at the very beginning, crypto is a highly volatile marketplace and is extremely uncertain. Thus, It is very important for you to understand the fact that just like any other currency in the crypto marketplace, PlayDapp does have its own risks as well and you should invest only if you are willing to take those risks and bear any and all losses if at all necessary.

If you are wondering, where can you buy PlayDapp? Let me help you with that. Currently, PlayDapp is available on all major crypto exchanges but, some of the popular exchanges that have PLA listed on them include Binance, Gate.io, Coinbase Exchange, Crypto.com as well as Upbit to name a few.

In conclusion, what are your thoughts on PlayDapp? Do let us know in the comments area below. To know more about various cryptocurrencies, do check out other articles we have on our website. Thank you for your time & if you found our content informative, do share it with your investor friends!

Also read: UMA: Everything you need to know