The electric vehicle (EV) market is India is currently witnessing a steady growth. As more and more people and companies are interested in this concept and are moving towards sustainability, Indian startups each day are coming up with newer and newer developments in order to cater to the demands. As the number of buyers and demand grows, so does the innovations and creativity in this sector.

One such startup is called E Motorad, it is a Pune based startup. This company has come up with an e cycle which can be used as both a cycle and an electric bike. The company has introduced two types of bikes, EMX and T-Rex. The bikes can be used for a comfortable ride across the city as well as adventurous uneven terrains, serving the purpose of a mountain bike.

The EMX bike has a 36V 250 W rear motor. This motor is powered by a 10.4 AH lithium ion battery from Samsung. This e cycle can achieve the maximum speed capacity of 28 km/hr. This model is capable to travel the distance of 45 km on a single charge. The driver does not require a driving license while riding this bike.

The T-Rex model is built in a similar way as the EMX bike with a similar built, brake and suspension. This bike is equipped with a 36 V 7.8 AH battery. This model is capable to travel the distance of 35 km on a single charge. 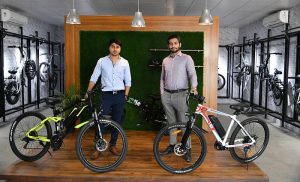 The founder of E Motorad, Rajib Gangopadhyay, while speaking about the idea of the company said, “The concept was inspired by European countries where most users use e-bikes for their commute. I came across this while travelling there in 2016.” He also added that he had spent almost three years researching and developing the models for the bikes along with the CEO Kunal Gupta. Rajib Gangopadhyay brings with him a total of eight years of experience in the mobility sector.

There is a reason why both the features of a bike and a scooter are incorporated in this cycle. A major concern of electric vehicle users is that sometimes the battery of the EV runs out in the middle of the journey. With this e cycle in case if the battery runs out, the user can simply paddle to the destination or towards the nearest charging point.

CEO of the company Kunal Gupta says, “The battery is detachable so that it can be charged anywhere, and it takes three hours to attain full charge. The cycles also have a digital screen that displays the speed, and an LED light in the front. A rider can manoeuvre in three modes — pedal-assist mode s/he would have to manually pedal, but would have some push from the battery; throttle mode where the e-cycle works as an e-bike, and a pedal mode, where the rider would just have to pedal like they would with a regular cycle.”