In collaboration with Google, Reliance Jio unveiled a new smartphone. At the 44th Annual General Meeting of Reliance Industries, the new smartphone JioPhone Next was introduced. The phone is projected to be extremely affordable, with a price tag that falls below that of today’s entry-level smartphones. To reach a wider audience, it promises an optimized Android experience on entry-level hardware.

At the conference, the Jio Phone Next design was showcased. It sports the standard boxy form, with a single camera sensor on the back and the volume rocker and power button on the right. The front of the phone has substantial thick bezels above and below the screen, as well as a selfie camera on top. Jio’s suite of apps, including JioMart, JioCinema, and Jio TV, as well as Google’s suite of apps, including Google Play Store, should be pre-installed on the phone. The company promises lag-free performance with speedier software updates and optimizations. 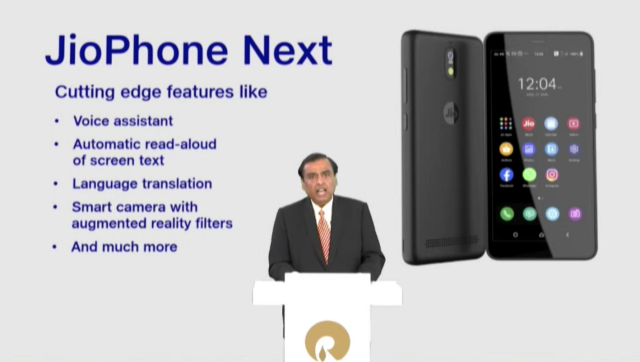 The smartphone would be powered by Google’s latest Android Go software experience, according to the previews of JioPhone Next. It’s a stripped-down version of Android that includes Go-edition apps like Google Go, Camera Go, and others. This device will also come with Google Assistant, automatic text to speech support of screen text, instant language translation, and several other functionalities, according to the company.

The telecom giant also assures users to experience the JioPhone Next smartphone with a superior camera experience. The phone has an HDR option as well as Snapchat Lenses, which can be accessed directly from the camera. While the devices lack the widely used fingerprint sensor. It will be powered by 4G capability which obvious fact as Jio promises to reach in hands of everyone in the country.

Mobile Handset manufacturers are aware of the market’s gap, but they’ve found it extremely difficult to fill it. Some companies, including Reliance Jio, have previously experimented with a variety of feature phones in order to reach consumers in India’s small cities and towns. As of late February this year, Jio’s KaiOS-powered feature phone, JioPhone, had used by 100 million consumers.

Reliance has confirmed that on the occasion of Ganesh Chaturthi on September 10, the JioPhone Next will launch. Although the price of the smartphone isn’t revealed yet. But the smartphone can cost less than Rs 5000 when you look at the design of the rear cover including big bezels and speakers and no physical fingerprint sensor. Reliance might even charge Rs 3000 or Rs 3999 for it. The JioPhone and JioPhone 2 were priced at Rs 1599 and Rs 2999, respectively, but because it is a 4G phone, this JioPhone will cost a little more than the previous two models.