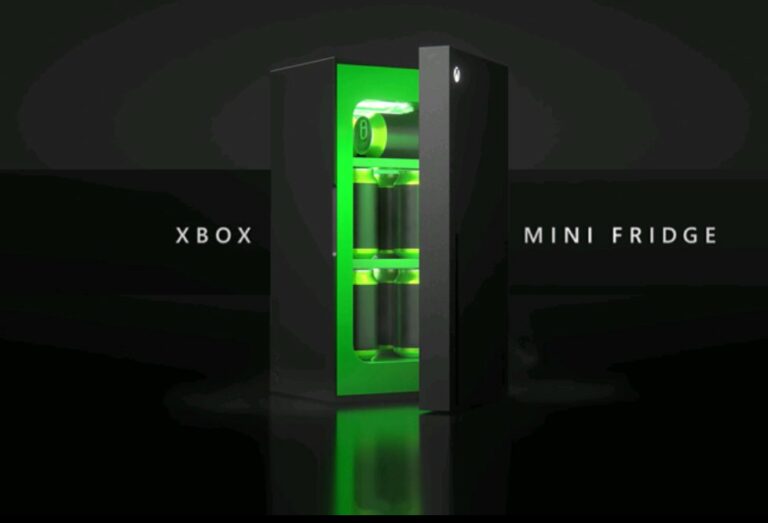 Microsoft unveiled an Xbox Mini Fridge inspired by the Xbox Series X game system at its E3 press conference last week. In early April, Microsoft executive Aaron Greenberg stated that if Xbox won the first-ever #BestOfTweets Brand Bracket, he would develop an Xbox Series X mini-fridge. Despite Greenberg’s assurances that his pledge was not an April Fool’s joke, most of us didn’t believe he was serious. Xbox won the vote, and it appears that he intends to follow through.

So far, all we know is that it will resemble an upright Series X console and will be the world’s “most powerful small fridge,” with “Xbox velocity cooling architecture.” The company collaborated with Snoop Dogg to produce a full-sized Xbox Series X Fridge last year. The gadget was “inspired by one of the most popular console memes on the internet” and “has the most cutting-edge next-generation cooling technology.”

However, as a “1:1 scale copy of the Xbox Series X, towering over 6 feet tall and weighing in at 400 pounds,” it wasn’t quite little. It had an Xbox power symbol on the front, luring you in with promises of a “bright guiding light for your munching expeditions” and a disc drive slot-shaped grip. When the fridge was opened, it made an amazing new Xbox sound

The Xbox symbol on the front of the fridge turns on when it’s plugged in, functioning as a bright guiding light for your munching expeditions. You’ll be welcomed with the relaxing tones of the new Xbox boot animation if you open the fridge door using the disc drive port. Once inside, you’ll see that everything of the food, beverages, and condiments is illuminated by Xbox green lighting.

See how many Easter eggs you can find hidden in the fridge by watching the reveal trailer. Hint: the objects were inspired by 12 of Snoop’s favorite recently published and forthcoming games (all of which are playable on next-gen Xbox systems), so look closely! Xbox Series X ($499), our most powerful system to date, and Xbox Series S ($299), our smallest console to date with next-generation capability.

By just retweeting the Xbox sweepstakes tweet from October 28 to November 4, one fortunate fan will have the chance to power their dreams and win their very own Xbox Series X Fridge.

Has Microsoft announced any release date for the Xbox Series X mini-fridge?

We don’t know if the small fridge will share any other characteristics beyond the logo and the green distinctive Series X green light. Microsoft hasn’t said whether this would be sold or given away (like the full-sized version), and it has teased at a worldwide release in November 2021.