Retired CEO of Zappos Tony Hsieh passes away at 46

Tony Hsieh, the former CEO of E-commerce pioneer Zappos.com and bestselling author, was a person who had got a great commendation in the world of technology. A man with phenomenal leadership qualities and idiosyncratic leadership philosophies revolutionized the tech world. Many people build their leadership qualities from experiences, but he was a person who is probably said to have an inherited skill of leadership. His leadership in Zappos has enabled Zappos to excel in many indistinct ways. Along with this, he has made many notable tremendous impacts outside the company.

He believed that-“when the philosophy of leadership is happiness, culture plays a wholesome role in development”. Sadly, he passed away on November 27, 2020, due to the injuries which sustained after the tragic house fire.

In 1996, he graduated from the top-rated Harvard University with a degree in Computer Science. Despite being in Harvard, he managed the Quincy House Grille selling pizza to the students. As he was the member of the Harvard University team, he won the ACM International Collegiate Programming Contest in Indianapolis. He worked at the Oracle Corporation after college. After five months he started his new venture co-founding the LinkExchange advertising network.

When the LinkExchange was sold to Microsoft, he along with his business partner, Alfred Lin decided to co-found an excellent venture firm- Venture Frogs. After that, they started investing in a variety of tech and Internet startups, like the Ask Jeeves, OpenTable and Zappos.

Nick Swinmurn approached Hseih and Lin with the idea of selling footwear online. Initially, Hseih was reluctant and rejected his offer. After Nick explained to them about the future of the footwear industry in the US and its market value, Hseih and Lin decided to invest in it through Venture Frogs. After two months, Hseih joined Zappos as the CEO, and the company’s fortune reached $ 1 billion by 2009.

In 2007,  Hseih had also received an Ernst & Young Entrepreneur Of the year award for the Northern California region.After adequately analyzing the e-commerce business, he aimed to make customers comfortable and make them trust the online shopping procedure. Later Zappos got listed in  Fortune as one of the best companies. Zappos was sold to Amazon with a deal of $ 1.2 billion.

He retired from the CEO post on August 24, 2020. Zappos inculcates happiness in its vision. Hseih had a broad understanding of what makes people happy.

LEADERSHIP – The Culture Of Happiness

One of the most exceptional leadership quality involves entitling others and imbibing confidence in them which will help them to work with full potential. This strategy helped in improving the lives of thousands in the technology community and society in large. His robust leadership strategies distinguish him from any other well-known leaders. For him, money and profits did not play significant importance rather the culture of happiness and fun was a real success for him.

Tony Hsieh relied upon this leadership philosophy and was able to set the foundation stone of Zappos. His management style and bold leadership reflect his ability to empower others in achieving success. In March of 2015, Hseih made Zappos employees the offer introducing a new self-management plan called “holacracy”, and the main idea of this was that he wanted the employees to excel through their unique creative ideas.

Though significantly less percentage of the employees chose the offer, it benefited in the upliftment of Zappos. According to him, there are four key aspects which make people comfortable in a work culture; continuous control, continuous progress, inter-connectedness & distinct vision.

Challenging the Norm with Robust Leadership

Robust leaders will indeed to take risks for the betterment of the organization and others. A happiness related leadership philosophy brings attention to stability. But in the case of Hseih, it turned to be beneficial. Moreover, his decision of eliminating and modifying the hierarchy paved the path to more significant opportunities for its sustenance. And by accepting everyone’s unusual ideas, he was able to frame a whole sort of distinct idea.

At Zappos, Tony Hsieh urged employees to uplift the customer service experience and advised them to spend more time interacting with the customers and take note of their grievances. The recent record of the longest customer call time exceeds 10 hours. He also aims to extend social values by establishing a relationship with the vendors. These things help in changing the company’s service quality and helps in the development process. He also played a significant role in shaping Downtown Las Vegas and was capable of bringing notable transformations.

Meek in Spirit And Dedicated To the Community

In 2009, Amazon bought Zappos for $1.2 billion. For many CEO’s that might be a game-changer in phrases of life-style and focus. But for Hsieh, those modifications had been now no longer what you would possibly expect. Hsieh maintains living in a trailer park in Las Vegas in which he pays a thousand a month in rent. He stocks the network laundry, kitchen, and pantry with different residents. And he enjoys sharing testimonies and gambling video games across the campfire with fellow buddies there.

He was a soft-spoken and self-observing person who believed that customer satisfaction is the key to the success and growth of E-commerce business. His kindness and generous nature had a tremendous impact on the people who were present in his surrounding. His main aim was imbibing happiness in everyone’s life and deliver joy and pleasure despite being in hectic work culture. By all accounts, his management philosophy is a unique one. 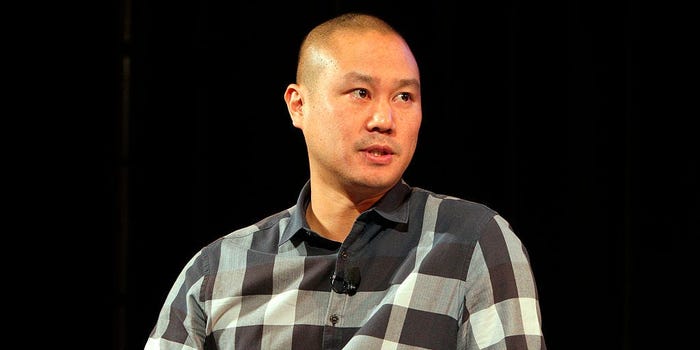 Of course, Hsieh will rather more than embrace a humble attitude. He’s daring in his generosity and commitment in creating the planet a higher place. His latest effort during this regard involves “The Downtown Project” in Las Vegas. Hsieh has invested with $350 million in invigorating the realm through investments in each property and businesses. The project has already created over 1,500 jobs and made a $209 million economic impact for the community. This is merely another example of; however, a leadership philosophy supported happiness can be quite bold and distinct.

His 2010 bestseller book- “Delivering Happiness” sustained more than half of a year at the top of the New York Times bestseller’s listing.

Hsieh may be a bold and prolific leader, and at the similar time, he embraces a leadership philosophy supported with happiness. In breaking this leadership philosophy down further, three key aspects may be highlighted. First, work-life balance and integration provide happiness and life satisfaction. Secondly, selecting a life path that’s personally fulfilling, and that must bring joy and happiness. And have the ability to contribute to society and provides to others further enhances these qualities. As a bold leader, Hsieh has not solely pursued these attributes himself; however, conjointly enabled others to try to the same. Despite a very distinctive approach in his leadership philosophy, Tony Hsieh is clearly among one in every of the boldest leaders in the globe today.

Unexpected End Of An Era

Good people pass away too soon living behind great discoveries and reforms. Tony Hsieh, recently retired from the CEO post, unfortunately, passed away on November 27, 2020, at the age of 46. According to a statement emailed to CNN by Megan Fazio, a spokesperson for DTP Companies, he died due to the injuries sustained in a house fire which occurred in Connecticut on November 18, while he was visiting his family.

On that day, the world lost an immensely great personality with an impeccable career in the entrepreneurship world. Called the “true pioneer” of the entrepreneurial world Many well-known personalities, along with his close acquaintances, mourned his death. He was also a great inspiration and role model for many youths in and around the world. His followers also expressed their deep condolences through Twitter and blogs. The technology community will miss him greatly, may his soul rest in peace.

What are your thoughts on Tony Hsieh’s legacy? Do let us know in the comments below. Also, if you found our content informative do like and share it with your friends.