Amid the legal battle with the United States, Ripple’s legal team has reportedly stated that Ripple has no plans to settle with the Securities and Exchange Commission (SEC). They believe that Chairman Gensler is likely to be persuaded that pursuing the case is picking winners and losers in the crypto business to the detriment of innovation. 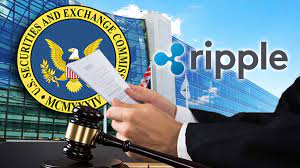 Ripple says it has no plans to settle with SEC

According to Charles Gasparino of Fox Business, Ripple’s legal team has no plans to settle the dispute with the Securities and Exchange Commission (SEC). On Friday, he tweeted: Ripple’s legal team tells Fox Business that they have no intentions to settle with the SEC over the XRP litigation, confident that they can show Gary Gensler is picking winners and losers in the crypto industry at the expense of innovation by pursuing the case.

BREAKING: @Ripple‘s legal team tell @FoxBusiness they have no plans to settle w @SEC_Enforcement over lawsuit on XRP, confident they can show @GaryGensler in pursuing the case is picking winners and losers in the #Crypto business to the detriment of innovation. Story developing

In December of last year, the SEC filed a lawsuit against Ripple Labs, its CEO Brad Garlinghouse, and co-founder Chris Larsen for selling XRP.

Garlinghouse was questioned in January about why Ripple did not settle with the SEC. “Can’t delve into specifics,” he said, “but know that we tried — and will continue to strive with the incoming administration — to settle this in a way that allows the XRP community to innovate, consumers to be protected, and orderly markets to be preserved.”

Supporters of Ripple and XRP are hoping that the new SEC chairman, Gary Gensler, who previously taught cryptography at MIT, will dismiss the XRP litigation. They claim that former SEC Chairman Jay Clayton had a conflict of interest. In August, a government investigator began looking into the circumstances surrounding Clayton and senior SEC official William Hinman’s XRP lawsuit.

Gensler has demonstrated that he is open to new ideas. “Do you favor responsible innovation?” Senator Cynthia Lummis, a pro-bitcoin member of the Senate Banking Committee, asked him during a hearing last week. “Oh my gosh, yes,” Gensler said right away. It’s brought us these lights in the room, for example. It has given us the ability to have a hybrid hearing with our peers. Innovation, after all, is what sustains access, economic activity, and provides so many of us with greater life opportunities.”

Satoshi Nakamoto’s innovation is real, according to the SEC chairman. “His innovation sparked the creation of crypto assets and the underlying blockchain technology,” according to Gensler, who also stated that “it has been and could continue to be a catalyst for change in the disciplines of finance and money.”

XRP, according to Peter Brandt, a commodity trader with over four decades of experience, is unregistered security. Just two months before the complaint was filed, Brandt, a long-time Ripple opponent, openly petitioned the Securities and Exchange Commission to categorize XRP as security. He also accused the company of fixing the volatile cryptocurrency’s pricing.

Under new SEC head we will have many more challenges of this type. Personally I think XRP is a security, but that would not prevent me from owning it under the right circumstances.

Despite the regulatory ambiguity, the senior trader would own the Ripple-affiliated coin “under the appropriate circumstances.”

Do you believe the SEC’s action against Ripple Labs and its executives over XRP will be dropped? Please share your thoughts in the comments box below.

Also read: US probe into Binance extends to include insider trading